Windows Phone 8.1 is the next big update for users running Microsoft’s OS. The update is expected to fill the loopholes left open in Windows Phone 8, and provides users with more attractive features to catch up with the rival operating systems, including iOS and Android.

Recently, Microsoft rolled out the Windows Phone 8.1 SDK to developers, and one of them was kind enough to leak some of the features that are expected to  ship with the latest update on Reddit. 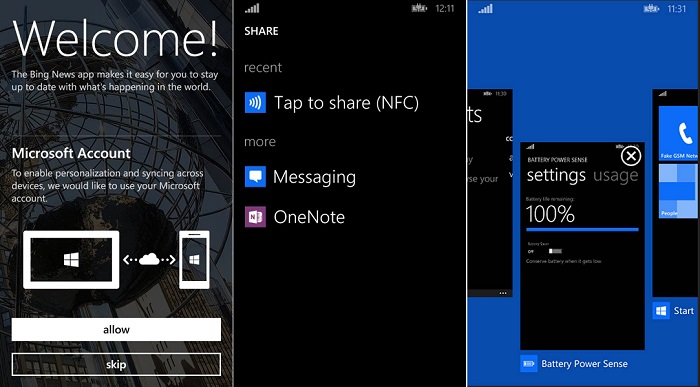 One of the major features are the Universal applications. This is a feature which was missing from Windows Phone 8.1, and is already present in iOS and Android that comes with universal apps that works with phones and tablets alike. Now, developers can build Windows Store and Windows Phone Store apps from the same shared HTML and JavaScript code, hinting at the possible merger of Windows RT and Windows Phone 8.1 — it’s not done yet.

Other features includes the ability to switch the default messaging app, Battery Power Sense feature in settings allowing users to monitor and track battery life, storage sense that lets users install apps on SD card, separate volume controls, multitasking improvements and much more. Another major change is that the back button won’t close the application, but it suspends the app in the background. To close the app, you need to swipe down from multitasking mode, something similar to what iOS 7 offers.

Unfortunately, there are no signs of the new voice assistant application Cortana in the leaked screenshots and the action center, it seems Microsoft is still keeping it a secret. We’ve heard several times about the it in the past, and it seems Microsoft might showcase it in April at the Build Conference, the event where Microsoft is expected to unveil the Windows Phone 8.1 OS.

We will update you if we come across any new features in the Windows Phone 8.1.