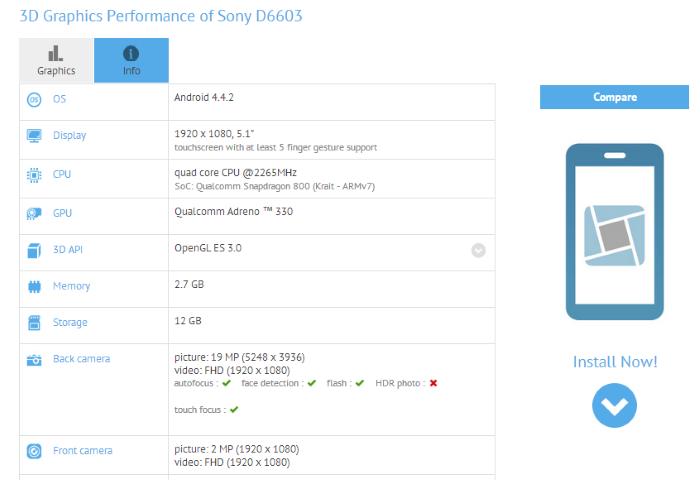 The alleged Sony Xperia Z3 has leaked on several occasions in the past few weeks. One of the disappointing thing that came to light, thanks to the rumor mill, is the handset will carry a similar set of specifications as its predecessor.

Recently, the alleged Sony Xperia Z3 with model number D6603 passed through the GFXBench test, but it doesn’t bring anything surprising on the table.

As per the benchmark listing, the alleged handset rocks a 5.1-inch display boasting a resolution of 1920 x 1080 pixels, with a quad-core Snapdragon 801 SoC with Adreno 330 GPU and 3GB of RAM on board.

The listing mentions that there’s 16GB of storage and a 20MP camera on the back for photos and videos, as well as a 2MP front-facing camera and Android 4.4.2 KitKat as its operating system.

Sony is also holding an event on 3rd September where the company is expected to announce the highly rumored Xperia Z3, alongside its compact version. We’ll update you as soon as we get any other information about the handset in question. If these are the real specifications of the Xperia Z3, then Sony fan may get disappointed since there’s hardly a change in the internals.