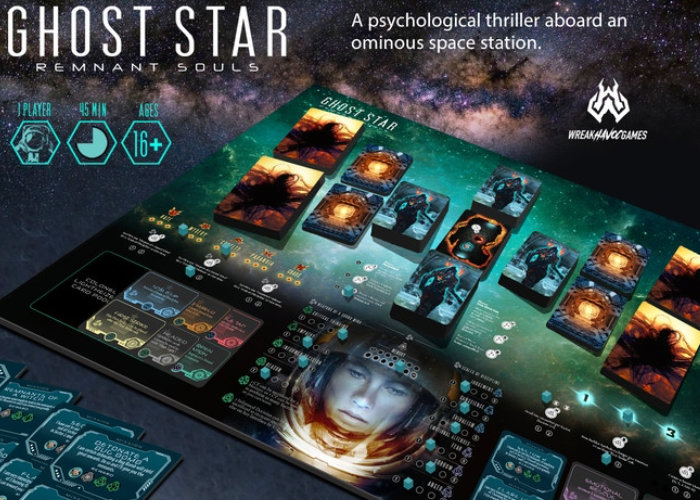 Ghost Star is a new solo board game created by Wreak Havoc Games that offers players a science fiction, horror, space adventure which includes elements of exploration, character development, strategy and alien combat. The game has been designed for solo play operates a large random map that occupies no space. Watch the quick teaser trailer below to learn more about what you can expect from the solo board game launched via Kickstarter this week.

Pledges are available from $39 and worldwide shipping is expected to take place during November 2019 is all goes well. “In Ghost Star enemies try and defeat you with nightmarish scenes and the entities themselves take on nightmarish forms that will haunt forever. It got us thinking… Everyone has that one nightmare that haunts them. You know the one. Is it a clown? An invisible threat? Giant snake? Sometimes just the environment in a nightmare is enough to permanently haunt you. Whatever it is, type it in and send it. We think it would be incredible to get a collection of nightmares from board gamers around the world. Don’t be shy, let’s make it happen!”

“Colonel and Supernova backers are invited to submit their worst nightmare in written form. All nightmares submitted will be showcased in the Ghost Star – Backer Book of Nightmares (with credit, country and backer number). All Colonel and Supernova Backers will receive the book whether they submit a nightmare or not. Additionally, twenty of the nightmare stories will be chosen as enemies and appear in the game! This includes a condensed version of the story, a custom illustration, and credit for the story on the enemy card.”