Earlier today we told you about the new Fring iPhone app that lets you make video calls from your iPhone 4, to any other smartphone with a front facing video camera.

With the Fring application you could also make calls over Skype, but now it seems Skype isn’t very happy about this new feature and it has blocked Fring from using Skype. 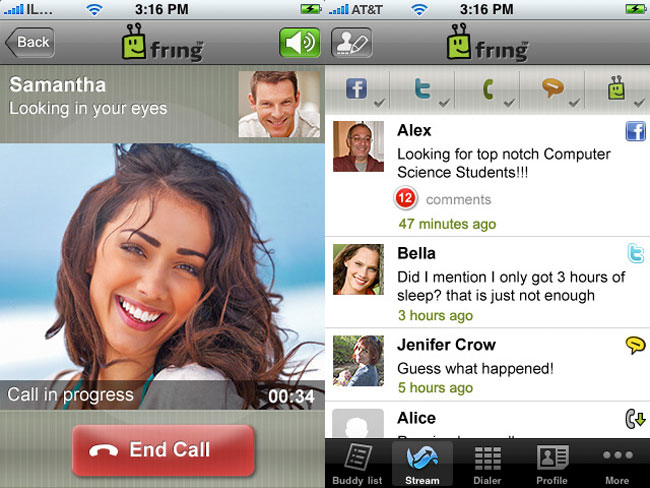 Fring has been working with Skype on Android smartphones for a couple of months, but Skype has now blocked it because of its popularity on the iPhone.

“We are disappointed that Skype, who once championed the cause of openness, is now attempting to muzzle competition, even to the detriment of its own users” said Avi Shechter, fring’s Co-Founder and CEO “We apologize to our users for the impact of Skype’s bullying and we will be happy to reconnect with Skype once Skype reverses their decision.” Avi continued, “We believe in communication openness and know that users will continue to vote with their mobile phones – opting for fring’s innovation, clarity, honesty and openness”.

I guess Skype doesn’t like the competition, and Fring’s service works well so I guess they have some real competition, no doubt Fring will be working on a desktop client to replace Skype, unless they manage to come to some agreement to get Skype working with Fring on smartphones.

We just go an email from Skype on this issue and they have released the following statement.

“Skype has been in discussions with Fring regarding our belief that Fring is breaching our API Terms of Use and End User Licence Agreement. Skype is disappointed that an amicable resolution was not possible but Fring’s decision to withdraw Skype functionality immediately was of its own choice.  Skype encourages developers to build products that work with Skype in accordance with our various API licences. However, Skype will rigorously protect its brand and reputation and those companies that do not comply with our terms will be subject to enforcement.