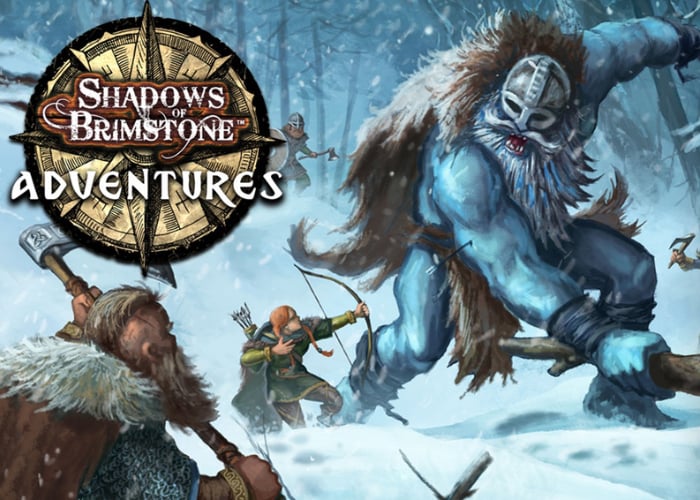 With eight days remaining on their Kickstarter campaign to raise the required funds needed to take the new board game Shadows of Brimstone Adventures expansions in to production. Flying Frog has already raised over $860,000 thanks to over 3,000 backers smashing their original pledge goal of just just $50,000.

To learn more about the co-operative dungeon crawl Shadows of Brimstone Adventures board game expansion sets Gates of Valhalla and Valley of the Serpent Kings. “ Norse Vikings and Spanish Conquistadors are some of history’s most ambitious and cunning explorers, setting out with sailing ships on voyages of discovery and conquest into uncharted territory. Each of these sets focuses on a new group of Explorer-themed Hero characters, venturing out on expeditions into lands that have been tainted by Dark Stone, and journeying through fantastic gateways into alien Worlds.”

The expansions are available from $80 and worldwide shipping is expected to commence sometime around September 2020. Each Adventure Set includes the following:

– A Set of beautifully detailed, multi piece hard plastic, 32mm scale game miniatures for the Heroes and Enemies, each designed with dynamic poses and detail perfect for painting. Gates of Valhalla contains 26 miniatures and Valley of the Serpent Kings contains 20 Miniatures, of various sizes.
– Immersive adventures and story driven gameplay, using the expansive and popular Shadows of Brimstone™ Game Engine.
– Fully Cooperative, with all of the players working together against the game itself
– Dynamically generated adventures, 8 different Missions, and 4 unique Heroes with many options for customization, the game is designed for massive replayability.
– Easy to learn with simple but fun gameplay and rewarding thematic story moments as you progress your Heroes.
– Built-in Campaign system for keeping your Hero characters from game to game, finding new items on your adventures and gaining new skills and abilities as you go up in level.
– Heroes can visit their Expedition Camp Site between missions to re-stock and re-supply before the next adventure, having a mini-adventure in camp.
– Double-sided Map Tiles include an Earth-based World on one side (Norse Lands or Spanish Fort) and an OtherWorld on the back side for the Heroes to explore; stepping through a shimmering portal and continuing their adventures in an alien world of crumbling ruins and terrifying monsters.
– Over 170 game cards, a set of beautifully illustrated, double-sided Map Tiles, a host of dice and counters, and all of the large Hero and Enemy record sheets needed to play.