I hardly recall a day in the past few weeks when we didn’t hear anything about the alleged Samsung Galaxy S5. The Korean OEM is expected to unveil the handset in less than a week in Barcelona, and until it gets official, we’ll continue getting small bits of information.

Recently, a leaked screenshot of Vodafone’s inventory system reveals that shows the upcoming Samsung Galaxy S5 in a new color, that is, gold. 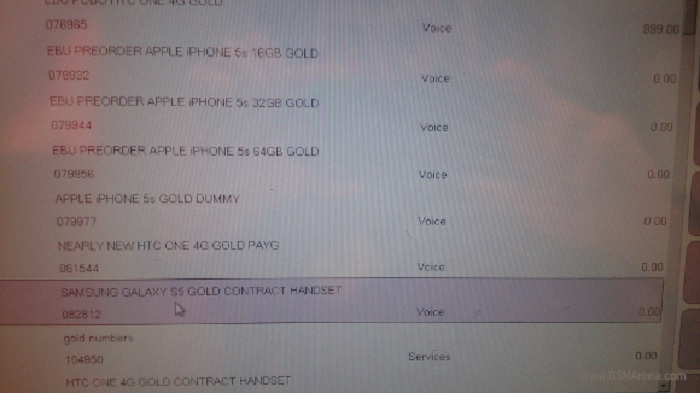 There are other phones listed as well, and if you can’t recall, Samsung Galaxy S4 also got a gold version, but it a few months after the official launch of the handset. However, it seems the gold color option may hit retail at launch this time. There’s no word about the other color options that will be available for the Samsung Galaxy S5.

Based on rumors, Samsung Galaxy S5 will come with a 5.2-inch display (one with QHD display while other will feature 1080p), a Snapdragon 805/64-bit Exynos 6 processor, 3GB of RAM, 32GB internal storage, 16MP camera, a fingerprint sensor in the home button and should come with Android 4.4 KitKat with a redesigned TouchWiz UI.

Samsung is expected to launch the handset on February 24th at their Unpacked 5 event, along with a few more goodies. We’ll bring you all the updates from the event on Monday. Mark your calendars and make sure you don’t have any other appointment. The event kicks off 20:00 local time (GMT+1).