Earlier today we found out some details of a new mobile processor from NVIDIA, the NVIDIA Tegra 2 3D, which is expected to be officially announced at Mobile World Congress 2011 next month.

Now it seems that NVIDIA has another new mobile processor planned for later in the year, the NVIDIA Tegra 3, which will be a quad core processor. 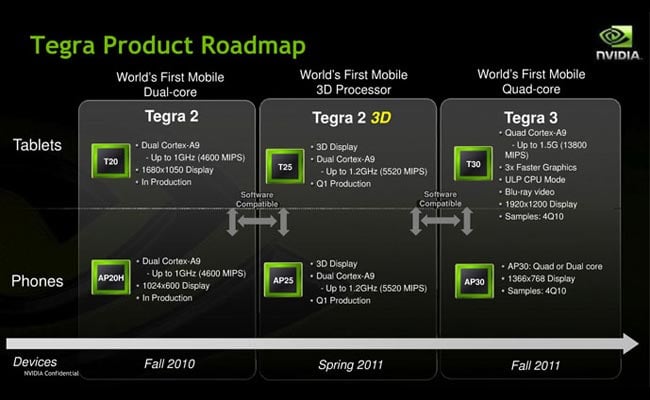 According to the specifications on the leaked product roadmap, the NVIDIA Tegra 3 will feature four Cortex A9 1.5GHz cores and will offer three times faster graphics than the Tegra 2.

It looks like these new Tegra 3 processor will also be able to drive a display with a resolution up to 1900 x 1200, which certainly sounds very impressive.

The roadmap shows a date of fall 2011 for the Tegra 3, so we suspect we wont see it in any actual smartphones or tablets until the beginning or 2012.