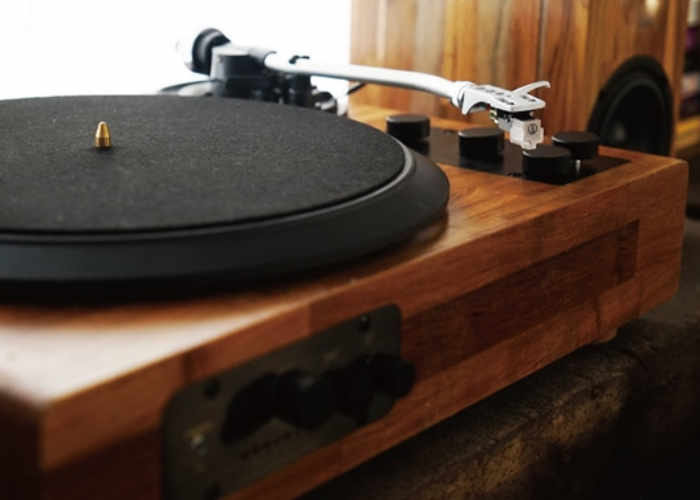 Minfort based in Los Angeles, California has created a new wooden turntable called the TT8 which has this week been launched via Kickstarter and is capable of playing both vinyl records and streaming playlists via Bluetooth combining both retro and modern technologies to provide a multifunctional wooden turntable.

Watch the demonstration video below to learn more about the construction of the TT8 wooden turntable which is now available to back from $599 for super earlybird backers, with delivery expected to take place during March 2018. The creators of the TT8 explain more about its design, inspiration and embedded technology.

A TT8 turntable integrates retro aesthetics and multi-functional amplifier together in one minimalistic turntable, bringing the elegance of wood and pure sound quality not only to vinyl listeners, but to all music lovers. Wireless connectivity via Bluetooth or WiFi is included in TT8. We want to assure that even without a Vinyl record, you can easily stream your favorite music to TT8 from various devices. By hooking TT8 up to the separated, exclusive 2.1 channel stereo speakers, you are ready to enjoy home theatre experiences.

Since we launched MIN7 last year on Kickstarter, it has been an amazing experience seeing how our products are beautifully integrated into our customers’ home interior collections. Joined solid wood is the key to the exterior design of TT8 and the exclusive 2.1 channel speakers. More than just a single pattern, multiple wood panels of 2-3 cm width create visual effects of layers. Additionally, our tweeter is coupled to a horn structure, adding dimensions to the outer design. After several tests, the slender shape of the final prototype matches perfectly with the extra 2+1 speakers, for all the edges are of the same radius.  TT8’s amplifier can connect your own loudspeaker or you can use the minfort loudspeaker set. (standard set or deluxe set) Two Class D amplifier / 50W for main channel / 100W for sub-woofer.

For more details, specifications and a full list of all available pledges jump over to the official TT8 Kickstarter campaign page by following the link below.