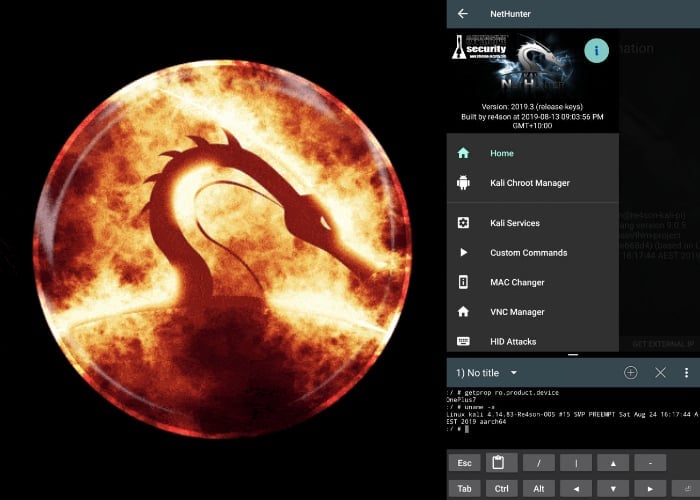 The third release of Kali Linux 2019 has now been made available for download bringing with it a wide variety of new features, enhancements and updates to hacking tools within the operating system. Kali Linux 2019.3 as a major update to the OS which was switched to the Linux 5.2 kernel series, providing users with improved hardware support when compared to Linux 4.19 used in previous releases. Linux kernel 5.2.9 is being used by default in this version, which updates many tools, including Burp Suite, HostAPd-WPE, Hyperion, Kismet, and Nmap.

As well as rolling out Kali Linux 2019.3 an update has been rolled out for the Kali Linux NetHunter project for running Kali on Android devices offering support for LG V20 International Edition, Nexus 5X, Nexus 10, and OnePlus 7. “The OnePlus 7 is now the phone we recommend for Kali NetHunter. It is the latest and greatest flagship device for half the price of other devices,” said Offensive Security. “One thing to note is package management is done through the F-Droid compatible NetHunter store, so you can even choose to have a NetHunter device without any Google Play.”

The latest Kali Linux 2019.03 also provides support for several ARM devices, including the PINEBOOK and Gateworks Ventana systems, support for Raspberry Pi 4 improvements when running on the Raspberry Pi Zero W as well as new kernels for ODROID-C2 and other Raspberry Pi devices.

“We are pleased to announce that our third release of 2019, Kali Linux 2019.3, is available immediately for download. This release brings our kernel up to version 5.2.9, and includes various new features across the board with NetHunter, ARM and packages (plus the normal bugs fixes and updates).​“ To download the latest release jump over to the official Kali website via the link below.