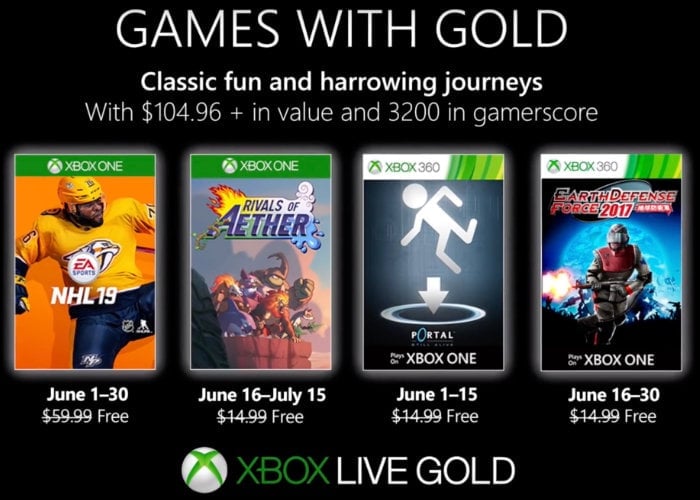 Major Nelson has today revealed the free Xbox games that will be available with an Xbox Gold subscription during the month of June 2019. As with other months Xbox Live Gold members will receive four new free games, two being made available on Xbox One and two on Xbox 360. Xbox One owners will also be able to take advantage of the Microsoft Backward Compatibility feature and enjoy both Xbox 360 titles on their Xbox One.

Next month during June 2019 On Xbox One, Xbox Live Gold members can download EA SPORTS NHL 19 normally priced at $60 for free. Together with Rivals of Aether normally priced at $15 from June 16th to July 15th. Xbox 360 owners will be able to enjoy Portal: Still Alive from June 1st until June 15th, 2019 for free saving $15. After which Xbox Live Gold Members can download Earth Defense Force 2017 normally priced at $15 for free through until June 30th. Checkout the announcement trailer below to learn more about the free Xbox games available from tomorrow throughout June 2019.

“Play together with Xbox Live Gold. June’s 2019 Games with Gold lineup for Xbox One includes: EA SPORTS NHL 19 and Rivals of Aether. For Xbox 360 owners (and through Xbox One backward compatibility), June kicks off with Portal: Still Alive, followed by Earth Defense Force 2017. June’s lineup provides over $104 dollars in value and up to 3200 in gamerscore.”