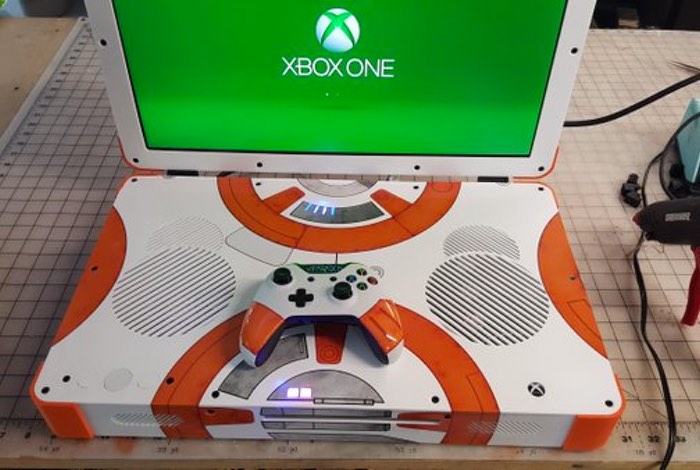 Custom gaming rig creator Edward Zarick, has this week unveiled his latest creation in the form of the Starwars BB-8 XBOX One Laptop which is sure to be a hit with all Xbox gamers and Star Wars BB-8 fans.

Not only has Edward created an awesome custom portable gaming system in the style of a laptop, combining a screen and Xbox One, he has also created his very own BB-8 robot which helps him explain more about his latest BB-8 Edition – XBOOK One laptop and can been seen in more details in the second video below.

We have all come to love the little droid in the new StarWars : Force Awakens movie! Brings us right back to the day that we first fell in love with R2-D2! Not only did I enjoy him in the movie, I was absolutely fascinated by how he worked. Of course magnets had to be involved, but that was all I had in mind and I went to researching the internet, and of course the internet responded with the BB-8 Builders Club on FaceBook. There were plenty of people, like myself, that wanted their very own BB-8. A lot of people have built R2-D2 replicas (www.astromech.net) and they were already on the way to bring BB-8 to life!

To learn more about both the BB-8 robot build and the XBOOK One laptop jump over to Edward’s official website via the link below, which also has more details about all the projects and portable custom gaming rigs he has created over the years.