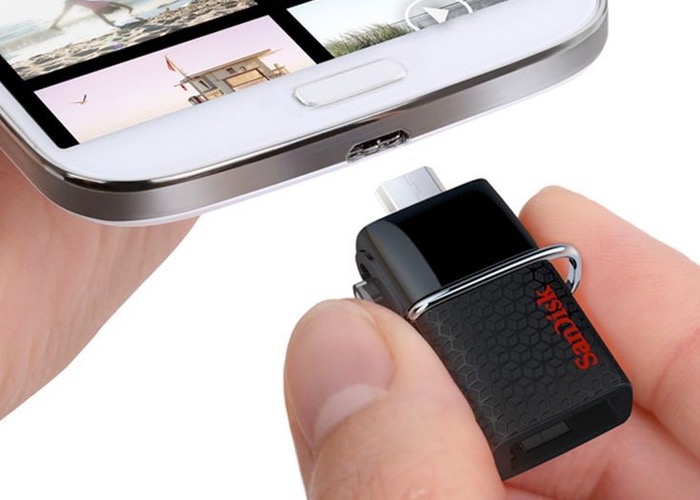 Smartphone owners that have OTG-enabled Android devices may be interested in a handy new Ultra Dual USB Drive 3.0 smartphone flash drive that has been created by SanDisk and unveiled at this year’s CES 2015 technology show.

The new SanDisk USB 3.0 smartphone flash drive is capable of transfer speeds of up to 130 MB per second and is equipped with a micro USB connector at one end and a USB 3.0 connector at the other.

Initially SanDisk will be offering storage capacities from 16 GB up to 64 GB at launch with prices starting from just $23 for the 16GB rising to $65 for the 64GB version. For more information on the new smartphone Flash drive jump over to the SanDisk website for details. SanDisk explains :

“Quickly and easily transfer your files between OTG-enabled Android smartphones and tablets and PC and Mac computers. Connect the drive to the micro-USB port of your Android device to move up to 64GB of content to the drive.

Transfer from your flash drive to your computer’s USB 3.0 port at the no-wait rate of up to 130MB/s. Speed like this makes it possible to move whole movies, audiobooks, or music libraries in just seconds. And that helps make your Android smartphone the ultimate on-the-go entertainment device as well your favorite camera. The SanDisk Ultra Dual USB Drive 3.0 makes it easy—and fast—to free up space for photos, videos, songs, and more.”