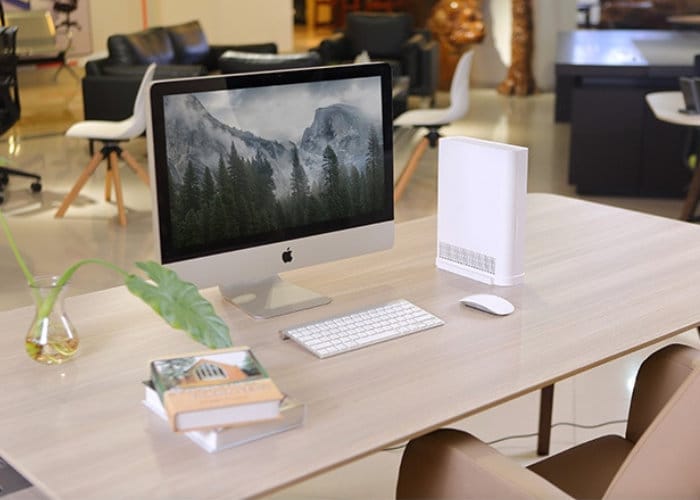 Computer designers and makers Allerbmu based in Melbourne Australia, have created a new silent high performing families desktop PC which takes the form of the SacPro. The compact desktop PC is equipped with SacPro’s patented Natural Airflow Cooling Technology, generating sufficient airflow to keep a 200W small-form-factor PC cool. The heat transfer surface is only 0.07m2, allowing it to achieve 5 times the effect of the traditional passive cooling systems, Say its creators.”The ultra-silent usage is obtained by tackling the noise issue at its source, without compromising the superior performance and storage capacity it is committed to delivering.”

Watch the demonstration video below to learn more about the range of SacPro silent compact PC systems which are now available via Kickstarter with early bird pledges available for this AU$329, £186 or $249 depending on your location. “It’s not a paradox. It’s your idea of a perfect gaming, designing or heavy-duty computer experience – you want to make the most of your PC without feeling like it’s overheating, crashing or sounding like it’s about to explode as it tries to cool down. Meet the SacPro High-Performance 0dB Fanless PC, the mini-computer that matches performance, convenience and silence for your maximum productivity and enjoyment.”

The SacPro High-Performance 0dB Fanless PC is available in two models taking the form of the SacPro S, made of aeronautical aluminium and supporting Intel i3, i5, i7 and other processors that match its dimensions of 185 x 44 x 235 mm. The SacPro casing is constructed from plastic and the design supports G4400, i3, and i5 processors, being capable of fitting large capacity mechanical HDD with is dimensions of 208 x 80 x 279 mm. “There are six different feature sets available, according to the CPU, GPU, RAM and other specifications that better suit your needs, but one thing is for sure: a SacPro PC is one impressive device that is sure to make your gaming and/or working experiences far faster, and far more silent, comfortable, exciting and productive than they have ever been.”

For more information and full specifications jump over to the official Kickstarter crowdfunding campaign page by following the link below.