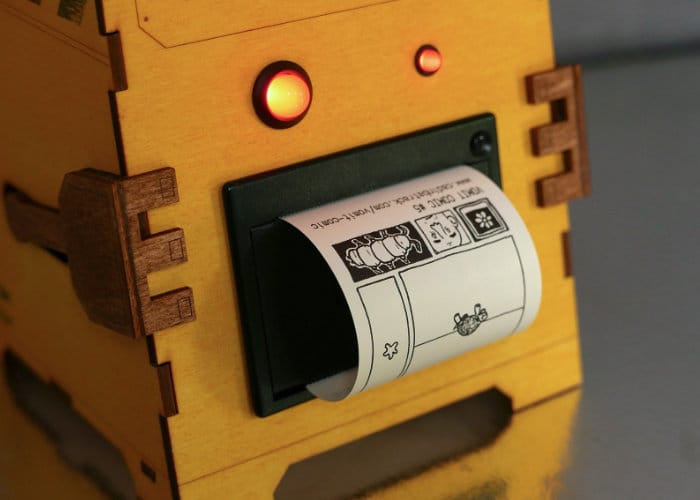 If you are searching for a Raspberry Pi project to keep you busy why not make your very own “Vomit Comic Robot” which uses the Raspberry Pi mini PC as its brain and will automatically print out a cartoon strip for your amusement when required. Created by Cadin Batrack the awesome Raspberry Pi robot creates one-of-a-kind comics on demand by processing hand-drawn images through a custom software algorithm.

The Vomit Comic Robot has been constructed using a thermal receipt printer mounted inside a laser-cut plywood case. A Python script running on the Raspberry Pi controls the robot’s LEDs, handles button input, and sends the comic images to the printer.

“Comics are vomited out the robot’s mouth via a small thermal receipt printer, or saved as high-res images. Although images are selected and placed randomly, the comic panel format suggests relationships between elements. Our minds create a story where there is none in an attempt to explain visuals created by a non-intelligent machine.”

If you are interested in building your very own, code for the project can be found on GitHub and more details are available from the official Cadin Batrack website which is also available via a link below.