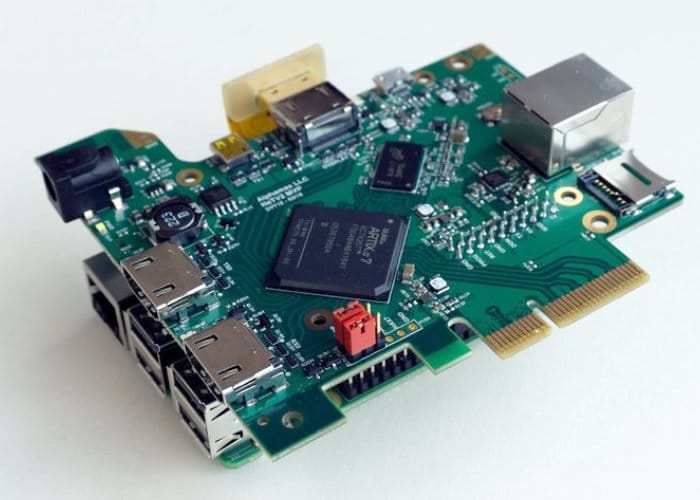 The NeTV 2 add-on for the Raspberry Pi mini PC thanks to the inclusion of a JTAG/UART header, although the board also includes PCIe 2.0 x4 connectors, allowing it to be used with a computer to offload work to an external GPU, and it aslo has that allows it to be plugged into a Raspberry Pi. The device currently offers two modes: a “classic” mode which allows you to do certain things (such as adding an opaque text overlay to live video streams) without decoding/decrypting the video and a “libre” mode which offers more functionality, including the ability to alter pixels in real-time to do things like replace text on the display.

The developer responsible for the NeTV2 explained more about its inspiration and design. “I’ve always wanted to build a digital video processing system. I freely tinkered with digital video throughout high school and college, but then the law changed. The passing of Section 1201 made it unlawful to process encrypted digital video feeds, even in the privacy of your own home. Now, with the help of the EFF, we’re asking the US government to restore the freedoms to innovate and express that America enjoyed when I was younger. I designed NeTV2 with the hope of finding like-minded developers who want to develop video processing applications but have felt restricted by the current laws limiting our freedoms to innovate and express, especially when it comes to encrypted videos.”

For more information and full specifications jump over to the websites via the link below where NeTV2 is available to back with early bird pledges available from $200. Features include :