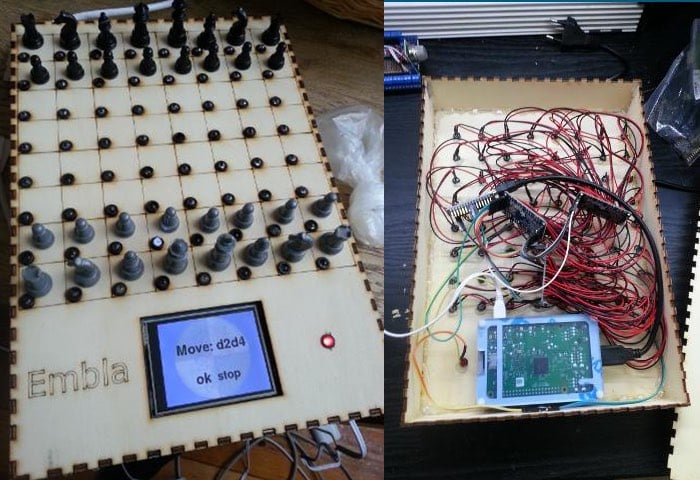 Raspberry Pi enthusiasts looking for a project to keep them busy over a weekend or two may be interested in a new Raspberry Pi chess computer which has been created using the free Linux Embla chess program.

The system is also equipped with a touchscreen display to enter moves and is enclosed in a laser cut wooden casing. Check out the video below to learn more about its design. The Pi chess computer was build at RevSpace, a hackerspace in The Hague in The Netherlands.

Components for the Raspberry Pi chess computer include :

– Raspberry Pi 3
– TFT with touch screen
– Arduino Nano
– This microcontroller accepts simple commands via its serial interface. E.g. “move e2e4” will make it blink the LEDs at the E2 and the E4 fields. “animate” will make it do an animation (when the board is in idle mode).
– 3x Adafruit 24-Channel 12-bit PWM LED Driver – TLC5947
– 64 LEDs (I ordered red LEDs but got white ones)
– 1 red LED for power status
– Embla chess program (available for free for Linux, Android, MacOS X and Windows); strength is around 1600 elo
– a custom python-script for the user-interface, using PyGame. The scripts speaks the UCI protocol so any other chess program that speaks this protocol will work. I also tried GNU chess for example.
– Raspbian
– the wood was chopped using a laser cutter