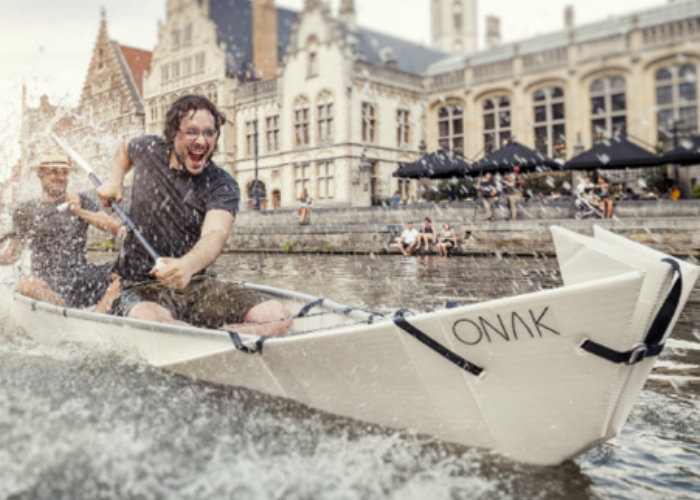 Following on from the original ONAK origami inspired folding canoe the team at ONAK has this week unveiled their second generation origami canoe in the form of the aptly named ONAK 2.0. Pledges are available from €1395 and worldwide shipping is expected to take place during April 2019.

ONAK canoes are constructed from an in-house developed Honeycomb Curv Polypropylene composite which is lighter, stiffer and stronger than aluminium (strength-to-weight) say it’s creators. The fold lines are flexible so they can be folded and unfolded thousands of times, and when it comes to the end of its life the canoe is fully recyclable. Canoe size: 465 cm (183”) x 85 cm (33.5”), Trolley: 43cm x 123cm x 28cm (16,9” x 48,4” x 11”) and Canoe weight: 15 kg (33 lbs).

“With ONAK 2.0 we really focussed on allowing you to get out there on the water in a seamless experience. The first generation of our ONAK canoes already broke some records in the speed in which they can be assembled, but with the ONAK 2.0, this now can be done in a more intuitive, straightforward way. Our production is both sustainable and social. This is why we only work together with local suppliers in Belgium and Germany. On top of that, the canoe is assembled in Belgium in a sheltered workplace. ”

For more details and full specifications as well as a complete list of all available pledge options jump over to the official Kickstarter campaign page by following the link below.