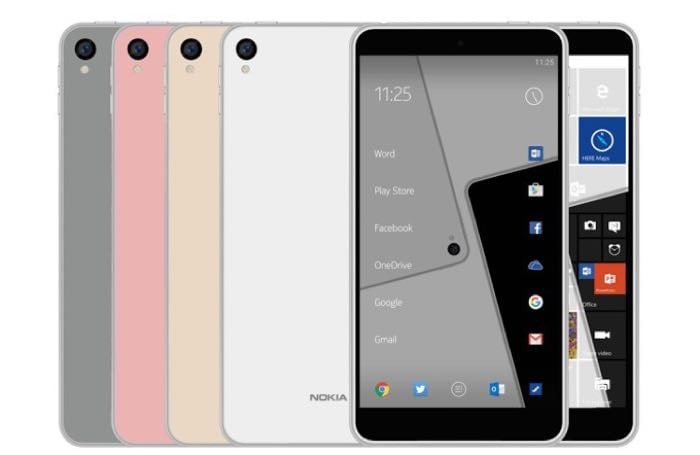 Nokia’s first Android smartphone will launch next year, under Nokia’s agreement with Microsoft, the company is allowed to release smartphones again in the fourth quarter of 2016.

Back in September we saw a leaked photo of the Nokia C1, this is though to be the company’s first Android smartphone and now what appears to be a press render of the handset has been leaked.

The photo which you can see above was posted on Weibo and it shows a very similar design for the new Nokia C1 as we saw in the leaked photos back in September.

The picture above shows two versions of the handset, one with Windows Phone, the other with Nokia’s Z launcher Android interface on top, which could suggest that it may come with a choice of either OS, although we are not 100 percent sure about this. The previous photo we saw showed the device running android.

When we heard about the device previously there were also some rumored specifications for the handset, these included a 5 inch Full HD display with a resolution of 1920 x 1080 pixels.

The device is also rumored to be powered by an Intel Atom processor and 2GB of RAM, the previous report also suggested that the handset was running Android Marshmallow. T

We suspect that the specifications that were revealed previously are for the prototype handset and will probably change by the time the device is released at the end of next year.

Nokia are rumored to be working with Foxconn on their new Android smartphone, the handset could end up b being popular for Nokia like their Nokia N1 Android tablet.