We’ve heard all sorts of rumors about the alleged Samsung Galaxy S5 from the past few days. It was reported that the company might ditch the plastic design and switch to metal casing to give it a more premium look. Yesterday, another rumor backed it upand said that a Taiwanese manufacturer Catcher landed an order from Samsung to supply metal casings.

All things aside, a mysterious Samsung device was spotted on a benchmarking site, GFXBench with a model number SM-G900S. The benchmark gives us very interesting information about this new Samsung device. According to GFXBench, the device comes with a 2560 x 1440 pixels resolution, which, if you remember was rumored to be the resolution of the purported Samsung Galaxy S5.

The results on GFXBench also provides more vital information about this SM-G900S, which includes MSM8974 chipset, which many of you may remember as Qualcomm Snapdragon 800 with Adreno 330 on board, which might be a beastie now, but Qualcomm did announce their latest Snapdragon 805 that will be a part of the upcoming flagship devices which will see the daylight next year. 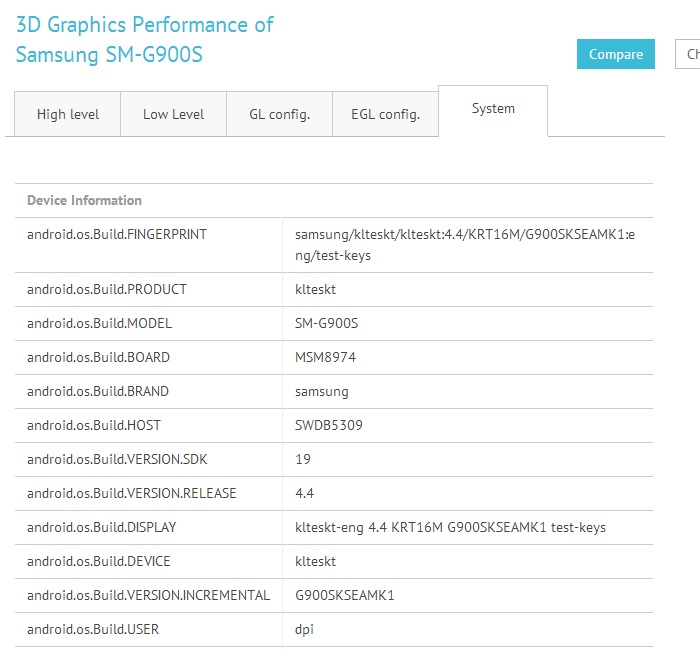 GFXBench doesn’t reveal anything extra, but past rumors suggest that it will come with 4GB RAM on board with a 16MP ISOCELL camera and a 64-bit processor or a Exynos 6 chipset. We’ve seen a bunch of rumors about its launch; some mentioned it will see the daylight in January, while the most recent ones point towards February. Both dates could be a possibility as two major events are going to take place in January and February — CES 2014 and Mobile World Congress 2014.

Well, let’s just take this as a rumor. I mean there’s no confirmation if the device benchmarked is really a Galaxy S5, it could be any other prototype the folks at Samsung are testing. Additionally, the model number SM-G900S is nowhere close to previous Galaxy S4 or S3 which starts with GT-Ixxx.

Surprisingly, the handset with a similar model number is the Samsung Galaxy Round that comes with G910S model number and a curved display. But, a successor of the recently announced handset? I don’t think so. If you remember, it was rumored that Samsung Galaxy S5 will come in two versions: one similar to Galaxy Round with a curved display while the other one will carry the same plastic form factor. Let’s just keep our fingers crossed and see what the Korean OEM has planned for its customers.