Microsoft just announced their new Windows Phone 8 update 3, one of the first devices to come with the software will be the new Nokia Lumia 1520.

We have already seen a number of photos of the Nokia Lumia 1520, now we have some more specifications on this new Phablet from Nokia. 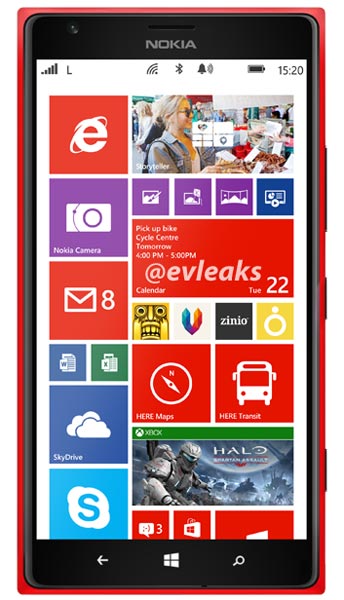 The Nokia Lumia 1520 will come with the latest version of Windows Phone, it will feature a 6 inch full high definition display with a resolution of 1920 x 1080 pixels.

The Lumia 1520 display is said to be an AMOLED PureMotion HD+ display, and the handset will be powered by a quad core 2Ghz Qualcomm Snapdragon 800 processor.

Other specifications on the Nokia Lumia 1520 will include 2GB of RAM and a choice of either 32GB or 64GB of built in storage, if you need additional storage, there is a microSD card slot which will offer support for 64GB cards.

We previously heard that the Lumia 1520 will feature a 20.7 megapixel camera, we now have more details on the camera, it will support a maximum resolution of 18 megapixels for photos with a 4:3 aspect ratio.

The camera on the device will also come with optical image stabilization and will offer a dual capture mode of 5/16 megapixels, plus 1.8x loss less zoom and 4x zoom at 720p.

The Lumia 1520 will come with a 3,400 mAh battery, the device will also feature wireless charging, and it also comes with 4HAAC microphones, it will also offer support for 4G LTE.

Nokia are holding a press event on the 22nd of October, where they will announce the new Nokia Lumia 1520 and also the Nokia Lumia 2520 tablet, plus some other devices.