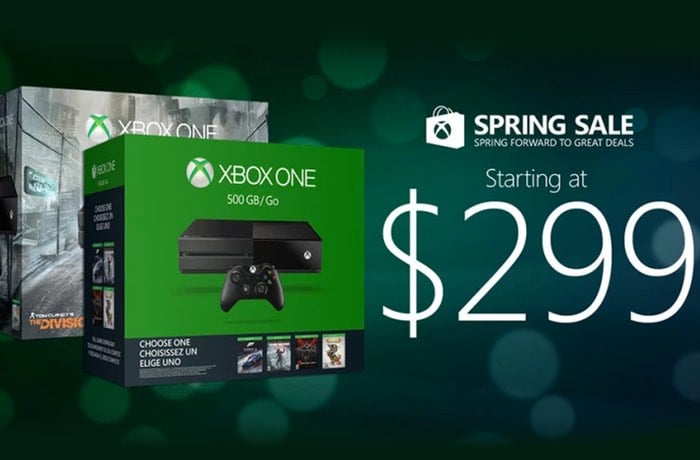 Microsoft has this week unveiled details of its new Xbox Spring sale via the Major Nelson website, which has released details of a new price for its Xbox One console that has now been reduced to just $299.

The limited time pricing is offering a $50 reduction on all Xbox One console bundles and includes The Division Bundle that launched this month, the Xbox One 500GB Name Your Game Bundle that lets you choose one of four great games to go with your Xbox One, and even the upcoming Xbox One Special Edition Quantum Break Bundle has $50 off throughout the US.

Then, starting on March 22 for one week only you can get great deals on digital Xbox games, PC games and Movies and TV from the Xbox Store. Save up to 40 to 60 percent off on games, with some at more than 60 percent off. The sale includes deals on top titles such as Fallout 4, Halo 5, Black Ops III, Far Cry Primal, Rainbow 6 Siege and over 150 offers. In addition, there will be deals on several backwards compatibility games such as Fallout 3 and Just Cause 2, now playable on Xbox One.

We’re not stopping with Xbox games, you can also get special offers on PC games like Hand of Fate, Leo’s Fortune, and Halo: Spartan Strike. Plus, there will be deals on hit Movies & TV shows such as The Martian, Straight Outta Compton, Sicario, Better Call Saul, and hundreds more. With Xbox One console bundles starting at $299 for a limited time, and epic game discounts on the way such as $20 off select titles like Halo 5: Guardians, there’s never been a better time to pick up an Xbox One.

Jump over to the Major Nelson Nelson website for more detail via the link below.