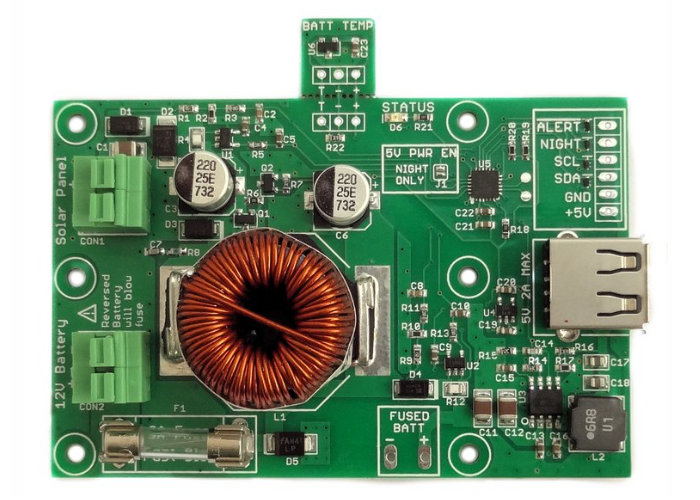 If you are considering building a solar project you might be interested in a new intelligent solar power system designed specifically for the Internet of Things which is now available via the Crowd Supply website. Learn more about the makerPower Solar video embedded below.

Early bird pricing is available from $35 for a single board during the discounted campaign timeline and free shipping throughout the United States is included with worldwide shipping available for an extra $10.

“makerPower Solar is a combination intelligent solar battery charger and 5 V power supply. It allows technical professionals and hobbyists to take their embedded systems and Internet of Things devices off the grid and locate them anywhere. It can operate as a simple stand-alone power supply or as a peripheral capable of fully reporting power conditions. A true maximum-power point (MPPT) algorithm extracts every joule of energy from all solar conditions.”

Features of the makerPower Solar include :

– Auto-shutdown/Restart with Alert : Too deeply discharging a battery will significantly shorten its life. makerPower Solar automatically shuts off power when, for the rare case of insufficient solar charging, the battery is low and automatically restores power after the battery is charged. It provides an alert sixty seconds before power down to allow the user’s attached system to properly shut down (to prevent file corruption for example). The shutdown and restart thresholds are configurable, allowing the user to make trade-offs between maximum depth of discharge and battery life to fit their requirements.

– Watchdog Timer : Reliability of remotely located systems is paramount. makerPower Solar includes a watchdog timer that can be enabled to power cycle the attached system if it does not periodically reset the timer. The system is given a sixty second alert warning, so it can properly shut itself down before power is removed, if possible.

– Night-only Mode : Interesting things sometimes happen after nightfall. Whether you want to take photographs of things that go bump in the night, or keep the dark away by powering a light or sign, makerPower Solar’s optional night-only power setting has you covered.

– Two Digital Interfaces : The included I²C interface provides access to status, control, measurements, and parameters allowing the power system to be part of the user’s application and data collection. makerPower Solar also provides Alert and Night status signals that can be fed into GPIO pins or can even used to directly control circuitry, such as a switching transistor.