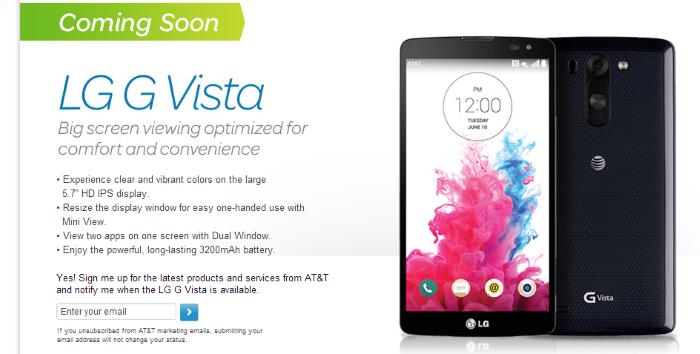 Not too long ago, the gigantic LG G Vista landed on Verizon for $99.99 tied to a two year contract with the Big Red. There were rumors floating around that the handset will also hit AT&T in the coming weeks.

It seems the rumors were correct, AT&T has announced the LG G Vista, which will be available for $49.99 on a two-year contract with the carrier.

The handset will also hit retail on AT&T Next instalment program. Customers opting for the AT&T Next 18 program will have to shell out $14.80 a month for 24 months, while it will come cost $17.75 a month for 20 months on AT&T Next 12. Customers can also get the device off-contract, but it’s going to cost them a hefty price of $354.99.

As far as the specifications are concerned, the device features a 5.7-inch display sporting a resolution of 1280 x 720 pixels with a 258 ppi pixel density. To make sure there’s enough processing power, there’s a quad-core Snapdragon processor clocked at 1.2GHz with 1.5GB of RAM.

On the storage side, it features 8GB internal memory with a microSD card support of up to 32GB. Other features includes an 8MP camera for photos and videos, a 1.3MP front-facing camera, a massive 3,200 mAh battery, and runs Android 4.4.2 KitKat as its operating system out of the box.

The handset will go on sale from August 22nd at AT&T stores, online and retail.