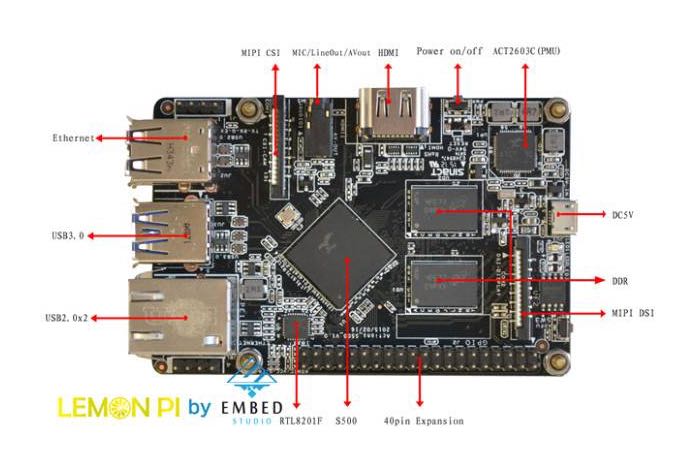 A competitor to the popular Raspberry Pi mini PC that has taken the maker community by storm has been launched over from the Indiegogo crowd funding website this week in the form of the Lemon Pi single board computer.

Lemon Pi is fitted with a powerful Actions S500 ARM Cortex-A9 quad-core processor rather than a Broadcom BCM2836 Cortex-A7 chip and is priced at the same $35.

The Lemon Pi computer has been designed to support Android5.0, Ubuntu12.04 and Linux3.10, and is both the same size as the Raspberry Pi and is compatible with the same interfaces. Watch the video below to learn more about the hardware included on the Lemon Pi mini PC created by Stewar Shao.

“With the utilization of various components and interfaces integrated in main controller chip Actions S500, Lemon Pi provides HDMI/Ethernet/USB3.0+USB2.0x2/MicoroSDcard/MIPI DSI&CSI without extra chip, and therefore it has a very concise layout of board.

More importantly, as Lemon Pi has the compatible 40pin I/O interfaces, the same as Raspberry Pi, hundreds of existing I/O expansion boards for Raspberry Pi can be used on Lemon Pi conveniently and directly.

Jump over to the Indiegogo website to make a pledge and be one of the very first to own the new single board mini PC.