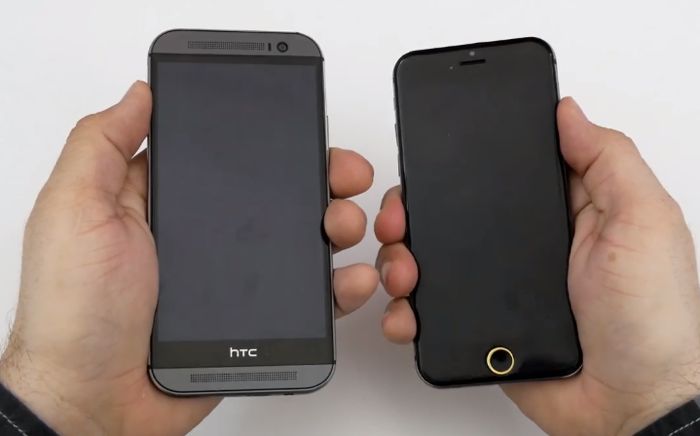 The new iPhone 6 will come in two sizes, one with a 4.7 inch display, the other with a 5.5 inch display, and now we have a video comparing the an iPhone 6 mockup to the latest smartphones from HTC and Samsung.

The video shows the Samsung Galaxy S5 and the HTC One M8 compared to the iPhone 6 mockup, which gives us an idea of how the devices compare in terms of design and size.

We are not sure if this is the final design of the iPhone 6, it is based on a number of leaked schematics and also some renders of the handset which have apparently come from Apple’s manufacturing partners.

As well as the larger display, the iPhone 6 is expected to come with a range of upgrades over the iPhone 5S, which will include a faster processor and more RAM.

Apple are said to be introducing their second generation 64-bit mobile processor, the Apple A8 with the iPhone 6, and the device is also expected to get an updated camera.

The iPhone 6 will also come with the next version of Apple’s mobile OS, Apple iOS 8, which will have a range of new features including Apple’s HealthBook app, the handset and the Apple iWatch is expected to have a range of health and fitness features built in.

We are expecting the iPhone 6 to launch in September, along with the new Apple iWatch and Apple iOS 8, this will be the 4.7 inch model, the 5.5 inch model is expected around October or November.