HTC One Mini 2 leaks are gaining momentum day-by-day. Recently, we heard the miniature handset will be known as One Mini 2, and we also heard about some specifications of the device.

Recently, the notorious leaker @evleaks revealed a press render of the HTC One Mini 2, which shows the device in three different colors: grey, silver and gold. 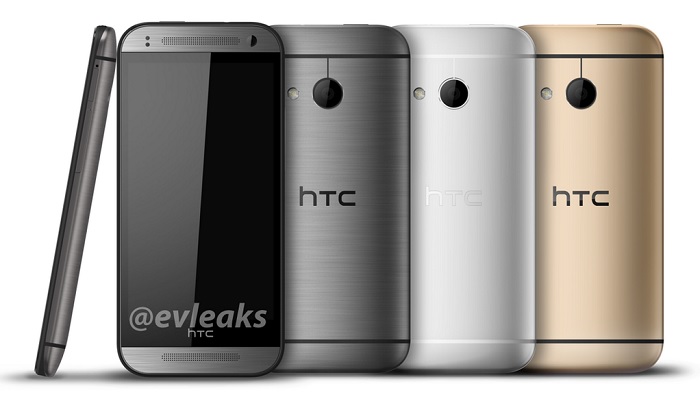 Unfortunately, it seems the HTC One Mini 2 will not come with Duo camera as its elder sibling. This may disappoint a few fans who were waiting for the miniature version to come with the same camera capabilities.

The purported HTC One Mini 2 is rumored to come with a 4.5-inch display sporting a resolution of 1280 x 720 pixels, and should come with a quad-core Snapdragon 400 processor clocked 1.4GHz with 1GB of RAM on board.

Other features include 16GB of internal storage with a microSD card slot, 13MP rear camera for photos and videos, 5MP front-facing camera, WiFi, Bluetooth, on-screen navigation buttons and should come with Android 4.4.2 KitKat as its operating system.

We’re hoping HTC will reveal the handset soon judging the pace of the leaks. Stay tuned, we’ll update you as soon as it happens.