Thanks to a deal between the Japanese automotive giant and the local government of Saitama Prefecture, Honda’s Electric Vehicle Testing Program will be rolled out in three cities starting next year. 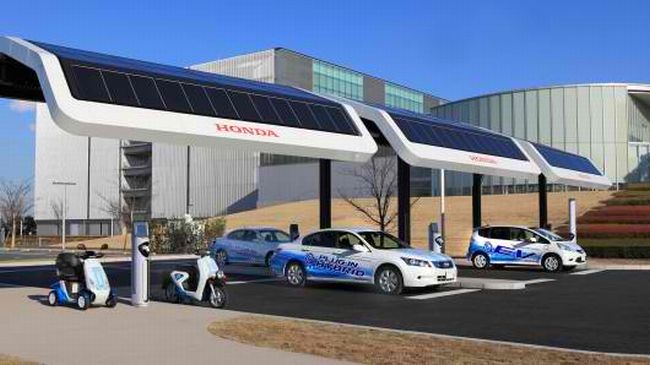 The goal is to lay the foundations for a sustainable energy future, which requires that so much 20th century infrastructure be replaced. Since this cannot be done overnight, Honda is taking baby steps. Lots and lots of baby steps. This explains the prototype charging station pictured above. Note the different vehicles.

The EVTP requires that several vehicles and scooters are tested to work out the kinks of developing full fledged charging infrastructure in cities around the world. In fact, the EVTP is also making its presence felt in Torrance, California, where it has partnered with Google (no surprise here) and Standofrd University. A hybrid Accord sedan is slated to be a test subject come 2012.

Here’s what Honda U.S.A.’s big boss Tetsuo Iwamura has to say about the Torrance initiative:  “The goal of the Honda Electric Vehicle Demonstration Program is to more fully understand the challenges and opportunities associated with such a fundamental shift in technology. The city of Torrance and the other participants will play a key role, by providing real-world feedback on their experience. They will help us tackle the important issues surrounding customer adoption of electric vehicles.”