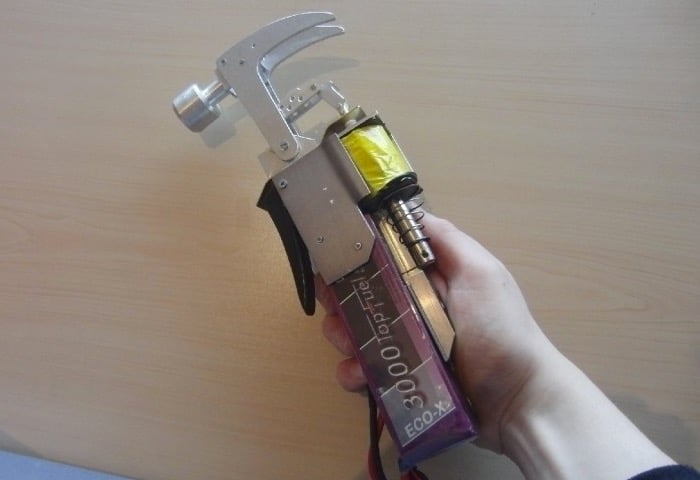 Simpsons fans may remember the classic episode when Homer creates an electric hammer to start his career as an inventor, in the episode entitled “The Wizard of Evergreen Terrace”, first released back in October 1998.

Now Patrick Priebe industrious maker and fan of the Simpsons cartoons has created a working replica of the original cartoon electric hammer that was created by Homer in that episode.

The electric hammer is powered by 80.5-volt, 1,000-mAh lithium-polymer battery and the design was built from scratch using aluminium.

As you can see in the video pulling back on the wooden trigger activates the electromagnetic coil which then draws in a cylindrical steel core moving the hammerhead at the same time. Once the trigger is then released a spring pulls the right call back down once again returning the hammerhead to its original position. Check out the video below to see whether the device actually works in real life or is as bad as indicated in the cartoon.

For more information on all the other projects that have been created by Patrick Priebe over at the Laser Gadgets website jump over to his Facebook page to see a full photographic catalogue of all his creations and replica builds.