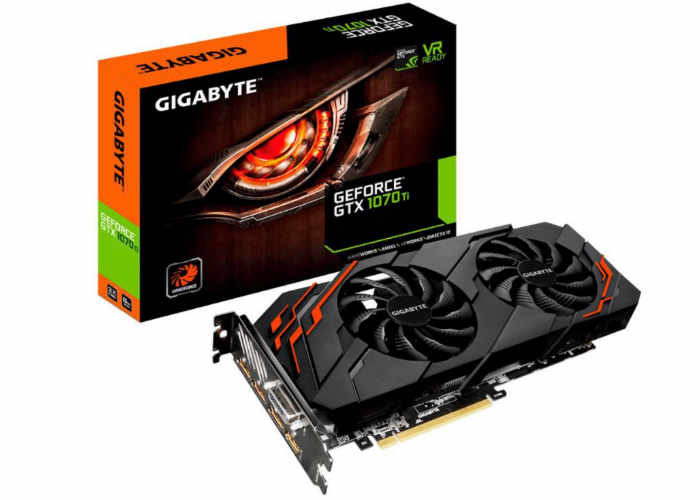 A new GeForce GTX 1070 Ti Windforce 2X graphics card has been unveiled by Gigabyte this week extending its range of GeForce GTX 1070 Ti graphics cards even further. As you can see from the image above the latest graphics solution from Gigabyte now features a more streamlined WindForce 2X cooling solution when compared to the WindForce 3X, making the card less bulky than others on the market. The cooling system incorporates twin aluminium-fin stack heatsink ventilated by a pair of 90 mm fans, which turn off when the card is idling, with power taken from both the PCIe slot and 1x 8-pin power connector.

The core clock frequency of the GeForce GTX 1070 Ti Model Windforce 2X based on the default “Gaming mode” is that fixed 1,607 MHz with a boost clock of 1,683MHz, when in “Software OC mode”, which requires OC Guru software to be active. Other features include a memory clock default at 8,008MHz, with a 256bit wide memory bus and memory at GDDR5 8GB with outputs tasing the form of a DualLink DVI-D×1, HDMI×1, DisplayPort×3. One 8pin×1 power header is present. The GeForce GTX 1070 Ti Model Windforce 2X uses the SKU code GV -N107TWF2-8GD and is now available to purchase worldwide.