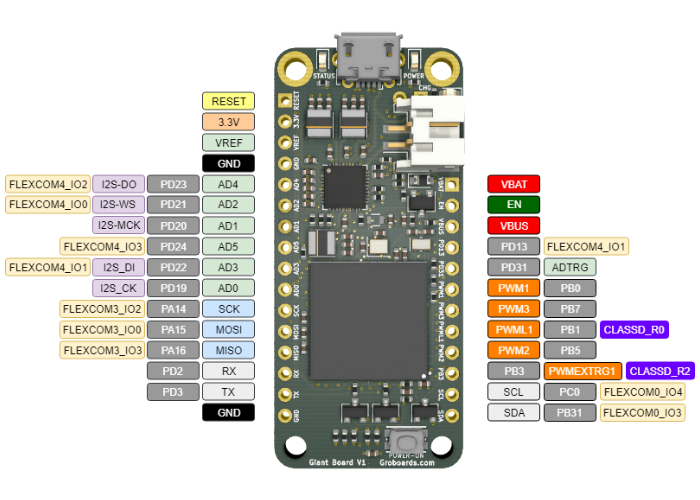 Developers, hobbyists and Linux enthusiasts may be interested in a new development board called the Giant Board which is capable of running Linux on a form factor similar to that of the Adafruit Feather. Powered by a Microchip SAMA5D2 ARM Cortex-A5 Processor 500MHz tiny single-board computer has been based on the Adafruit Feather form factor created to provide users with plenty of power for a wide variety of projects and applications.

“The Giant Board is a super tiny single-board computer based on the Adafruit Feather form factor. We always want more power in a smaller package and the Giant Board delivers! There are always those couple of projects that just need a little more power, or a different software stack. With the release of the ATSAMA5D27C-D1G, it’s made linux possible in such a small form factor. Listed below are the specs and current pinout of the board.”

Specifications of the Giant Board include :

The Groboards website explains more about the current status of the Giant Board which is currently in the final stages of development. “Right now the Giant Board is 95% complete as far as the design of the board itself goes. The pinout is solid, but some minor changes to other parts of the design might still be needed before production. The plan is to release a small amount of Giant Boards to developers and early adopters interested in providing feedback, so I can make any final tweaks before the main production.”

As soon as the Giant Board officially launches and is ready to purchase we will keep you up to speed as always. In the meantime follow the links below for more information.