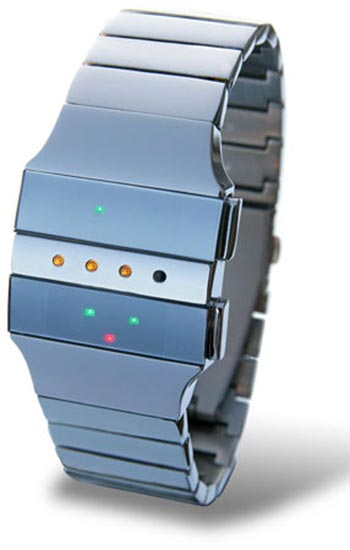 The Tokyoflash Heko features the usual built in LEDs and a sleek solid stainless steel finish.

“Hours are presented on the upper screen. The hours three, six, nine and twelve in the same positions as on a clock face. Hours one and two are in between, a combination of lit LEDs show the hour.

Minutes are presented on the center and lower screens. The lower screen shows zero, fifteen, thirty and forty-five minutes in the same position as on a clock face, the LEDs in between show five minutes each. The central screen presents four single minutes, a combination of lit LEDs show the minutes.”

The Tokyoflash Heko is available for $109 from Tokyoflash.