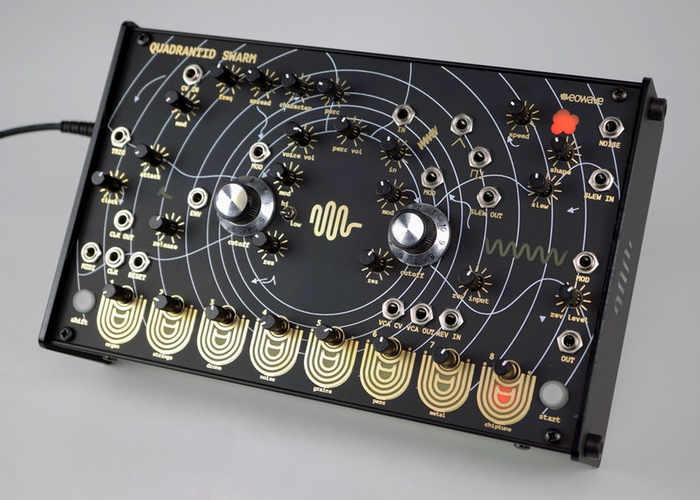 Paris based music hardware company Eowave has created a new experimental touch synthesiser called the Eowave Quadrantid Swarm which comes complete with eight future modes : Organ, Strings, Drone, Noise, Grains, Perc, Metal and Chiptune and will ship with included instructions detailing the specifics behind each mode the waveform, perc sound and character effect. Watch the demonstration video below to learn more about the construction, features and tools that will allow you to explore sound design and music say it’s creators.

The Eowave Quadrantid Swarm synthesiser is now available to back via Kickstarter with pledges available from €425 and shipping expected to take place during April 2018. Each pledge comes equipped with a MIDI input extension and patch cables. It’s development team explain more about the inspiration behind the Quadrantid Swarm.

The Quadrantid Swarm is a desktop touch synthesizer aimed at sound designers and musicians who are looking for an expressive tool to explore rich and unusual soundscapes with a direct intuitive approach. Past research and development at eowave has contributed to a range of successful products aimed at musicians and performers – including sensor interfaces, MIDI devices, modular synthesizers and more. This has been honed and distilled in the Quadrantid Swarm. It is an instrument that has been designed openly – to be used with MIDI, alongside your modular synthesizer/CV sequencer or to be explored as a standalone drone/sequencer/generative synthesizer.

For full specifications on the Eowave quadrantid swarm touch synthesiser jump over to the official Kickstarter campaign page by following the link below.