Bethesda fans looking for the complete collation of games from Arena to Skyrim need to look no further than the newly unveiled Elder Scrolls Anthology which is set to start shipping on September 10th, 2013.

The Elder Scrolls Anthology is now available to pre-order for $80 and includes Arena from way back in 1994, Daggerfall, Morrowwind, Oblivion and Skyrim games with add ons. 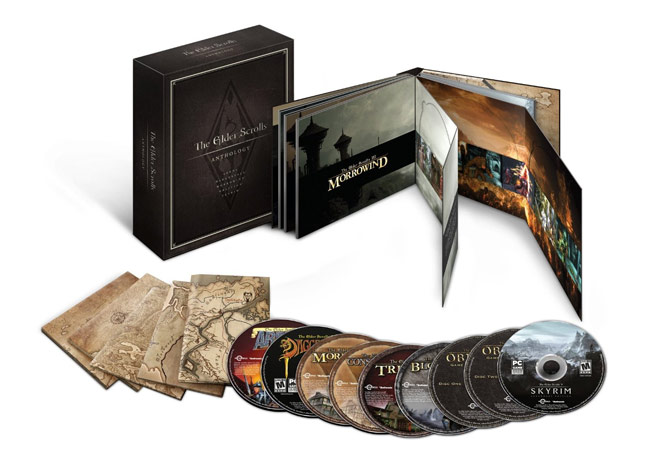 Arena: The Anthology features the original version of Arena and will launch within a DOS emulator.

– Daggerfall: The ancient golem Numidium, a powerful weapon once used to unify Tamriel has once again been unearthed. The Anthology features the original version of Daggerfall and will launch within a DOS emulator.

– Morrowind: To fulfill an ancient prophecy, the Emperor sends you, to the island of Vvardenfell to rid the land of Morrowind of a dark curse. Also includes: Tribunal and Bloodmoon add-ons, plus The Elder Scrolls Construction Set.

– Oblivion: With the Empire ready to crumble, the gates of Oblivion open and demons march upon the land. In the shadow of evil, a hero will rise from the ashes of a fallen Empire. Also includes: Knights of the Nine and Shivering Isles expansions.

– Skyrim: Dragons, long lost to the passages of the Elder Scrolls, have returned to Tamriel. Also includes: Dawnguard, Hearthfire, and Dragonborn add-ons.