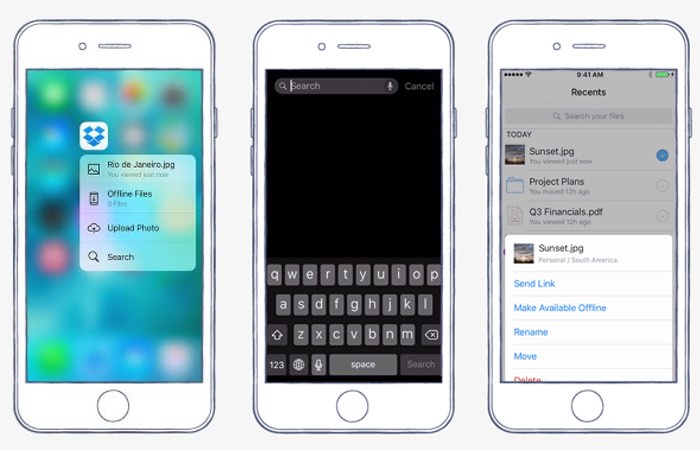 Dropbox has today released a new iOS 9 Dropbox app update which has brought with it support for Apple’s new 3D Touch technology that has been incorporated into Apple’s latest iPhone 6s and iPhone 6s Plus smartphones.

The new Apple iPhone 6S phones will be available to purchase from September 25th from Apple stores, and are now available to preorder directly from the Apple website or Apple Store iOS applications.

Dropbox now includes new features iOS 9 users can enjoy, the first provides easy access to Dropbox via Apple’s Spotlight search facility. As well as enjoying the ability to now open any shared links you tap, no matter what app you’re in directly in the Dropbox app.

Dropbox explains more about the new iPhone 6s 3D touch support iPhone users can enjoy while searching for the Dropbox documents on their mobile devices :

Getting your hands on an iPhone 6s or iPhone 6s Plus? Our new iOS app has something special for you. We’re excited to be one of the first apps to support 3D Touch gestures in the newest iPhone models.

The first place you’ll be able to use 3D Touch with Dropbox is your iPhone’s home screen. Press down on the Dropbox app icon, and a menu of quick actions will pop up. There you’ll be able view your most recent file, jump to your offline files, upload a photo, or search your Dropbox. It’s a quick and easy way to take some of the most common actions in Dropbox.

Once you’re in the Dropbox app, you can use 3D Touch to Peek into a file or folder. Lightly press a file name for a preview, or a folder for a peek at its contents. And if you want to Pop from a preview into the full file or folder, just press a little deeper.

You’ll even feel subtle taps when you use these new gestures. They’re bringing a whole new way of interacting with Dropbox, and we can’t wait for you to try them out.