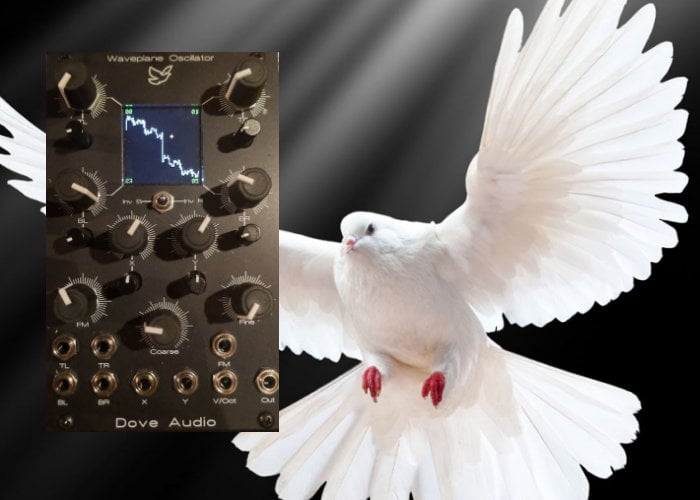 Electronic musical instrument designer and builder Paula Maddox has created the Dove Audio Waveplane Oscillator module for Euro or MU modular Synthesisers. Watch the demonstration video below for a great overview what you can accomplish once the module is connected to your setup.

The Dove Audio Waveplane Oscillator module has launched via Kickstarter this week is already over halfway towards its required pledge goal. Pledges are available from £375 and worldwide deliveries expected to take place sometime around August 2019. “The Waveplane oscillator is a new dimension in wavetable synthesis. It allows 6 dimensions of movement for the output wave being generated giving unprecedented amount of motion in a wavetable oscillator. It’s designed to fit in your modular synthesiser, either in Eurorack format or MU format.”

“The oscillator generates four simultaneous waveforms and, at its simplest, it lets you seamlessly morph between four different waveforms using the X and Y controls. Along with the X and Y controls having CV inputs, each of the four waveforms has its own wavetable, providing you with 6 dimensions of movement for the output wave being generated, giving unprecedented amount of motion in a wavetable oscillator. Each ‘corner’ wave has 32 waveforms which are arranged in wavetables. There are, of course, the usual suspects – sawtooth, sine wave, triangle wave and square wave. The remaining 28 waveforms are all newly created to mimic certain types of sounds, like vocal formants, distorted waves, metallic sounds and many more. You can select the waveform for each corner; each corner has independent control voltages enabling you to create incredibly rich sonic textures.”