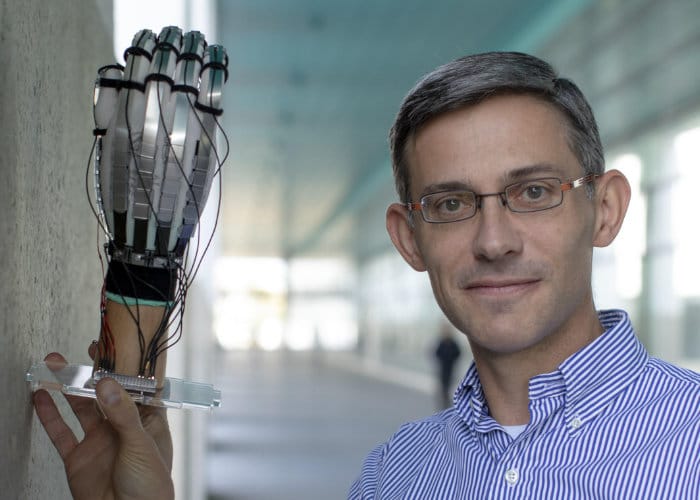 Researchers from EPFL and ETH Zurich have created a new pair of ultra lightweight VR gloves which weigh less than 8 g per finger and provide users with the ability to touch and manipulate virtual reality objects. The prototype lightweight VR clubs are capable of providing realistic haptic feedback and is currently powered by a thin electrical cable, but thanks to the low voltage and power required, a very small battery could eventually be used instead, providing unparalleled freedom of movement. Check out the video below to learn more about the DextrES VR gloves constructed from with thin elastic metal strips running over the fingers.

“The strips are separated by a thin insulator. When the user’s fingers come into contact with a virtual object, the controller applies a voltage difference between the metal strips causing them to stick together via electrostatic attraction – this produces a braking force that blocks the finger’s or thumb’s movement. Once the voltage is removed, the metal strips glide smoothly and the user can once again move his fingers freely. “The system’s low power requirement is due to the fact that it doesn’t create a movement, but blocks one”, explains Herbert Shea, head of EPFL’s Soft Transducers Laboratory (LMTS).

“The human sensory system is highly developed and highly complex. We have many different kinds of receptors at a very high density in the joints of our fingers and embedded in the skin. As a result, rendering realistic feedback when interacting with virtual objects is a very demanding problem and is currently unsolved. Our work goes one step in this direction, focusing particularly on kinesthetic feedback,” says Otmar Hilliges, head of the Advanced Interactive Technologies Lab at ETH Zurich. For more information on the gloves jump over to the official EPFL website by following the link below.