Some of our readers will remember that a company called Lodsys has been sending out legal letters to iPhone and Android app developers, claiming that in app purchases for their apps are infringing on Lodsys’s patents.

Apple responded to Lodsys a while back, and basically told them that Apple was responsible for the in app purchases and not the developers, but this hasn’t stopped Lodsys going after the developers, as the company are claiming that Apple’s agreement with them does not cover the individual developers. 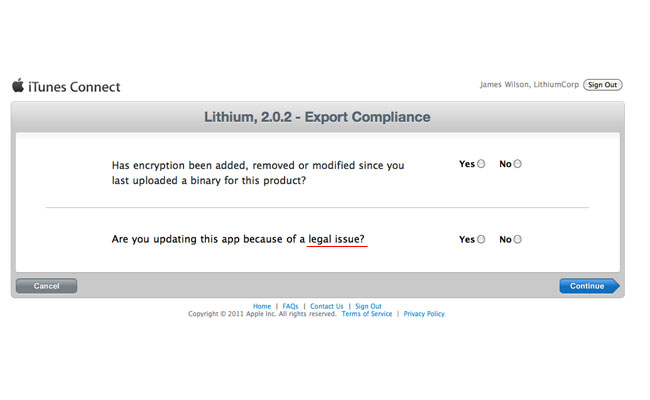 Apple has given the impression that they are standing behind their developers, and now more evidence of this has been revealed, as one developer James Wilson, was asked by Apple if his app had any legal issues when he logged into iTuns Connect.

This could mean that Apple is about to do something about the legal action taken by Lodsys against the developers, and we suspect Apple may end up taking them to court.

We have not heard anything yet from Google, with regards to Android developers who have also received the same letter from Lodsys regarding their in app purchases on Android apps.