Samsung Galaxy Note 2 is included in the list of devices that are expected to get the Android 4.4.2 KitKat update, but the Korean OEM didn’t give out an exact launch date when the Galaxy Note 2 Android 4.4 KitKat Update would be released.

Now, according to a GFXBench listing, the handset might get the Android 4.4 KitKat as its listed under the operating system on the Galaxy Note 2 OS section. 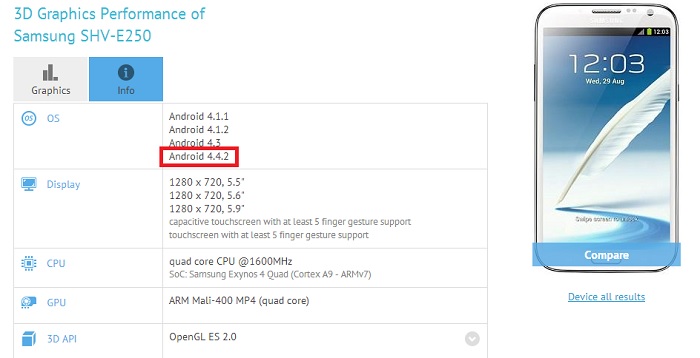 The interesting part here is that at least one variant of the Samsung Galaxy Note 2 was tested on the GFXbench with the latest Android 4.4.2 KitKat as its operating system. Although there’s no word which variant it is, and when will we see the update, but the good thing is, it’s being tested by the folks at the Korean OEM.

Before you get too excited, you should know that the testing could go on as long as months, so all we can do is hope that it will not take a long time in the testing phase. We’ll update you as soon as any information comes up regarding the Android 4.4 KitKAt update for the Galaxy Note 2.

On the other hand, Samsung has rolled out the Android 4.4 KitKat update for the Galaxy Note 3 and Galaxy S4, but it has not reached all regions at the moment. We checked our Galaxy S4 as well as the Note 3, but we haven’t received the update at the time of writing this.