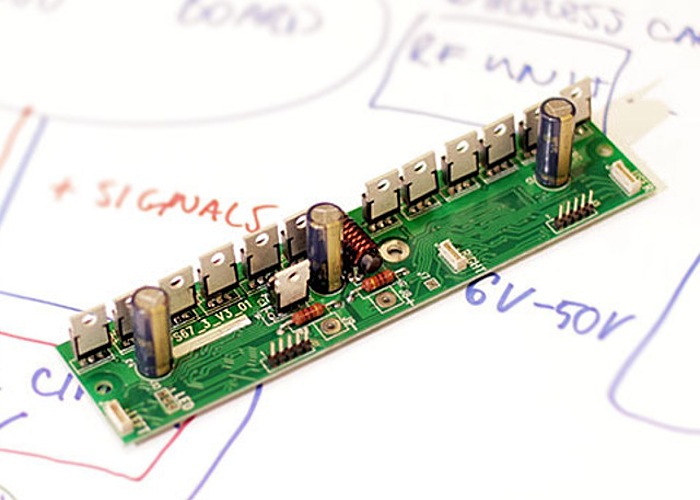 Raspberry Pi and Arduino developers that are considering building a new project using brushed all brushless motors, might be interested in a new versatile electric motor controller called the Power Brick which has been developed by Pablo Engl based the UK.

The Power Brick has been specifically designed for high current, sine/square wave, user configurable, Arduino and Raspberry Pi controlled projects. Watch the video after the jump to learn more about the Power Brick project and see it in action.

“From the picture and video of our 2-channel controller you can see that no heatsinks are fitted. It was designed to run 10A on each channel. As the PCB runs very energy efficiently and the quality components were properly sized, none of the components overheats. In fact you can touch all components without burning your fingers. This is important as we want the power from your battery to go to your motor and not turn the controller into an electric heater. For this to be possible at 20A we will be using 12 MOSFETs with a very low on resistance.

To get these at an affordable price we will have to buy at least 5,000 off. Obviously you could bolt a heatsink to the FETs and solder additional copper wire to the tracks, but we believe that if you want to run motors at more than 20A continuous you should choose a pledge that includes an additional daughter board. This small board comes with another 12 MOSFETs and is hooked up to the mainboard to allow you to double the input current.”

The Power Brick project is currently over on the Kickstarter crowd funding website looking to raise enough pledges to make the jump from concept to production.

So if you think Power Brick is something you could benefit from, visit the Kickstarter website now to make a pledge and help Power Brick become a reality.