Okay, in magnificent Japanese fashion the brains behind this wonderful device named it real creepy: PossessedHand. Being a collaboration between Sony and Tokyo University, PossessedHand is a rare type of device that transmits programmed messages to muscles, thereby manipulating limbs without the decision making impulses of the brain. Revolutionary or the first step to Ghost In The Shell nightmare future? 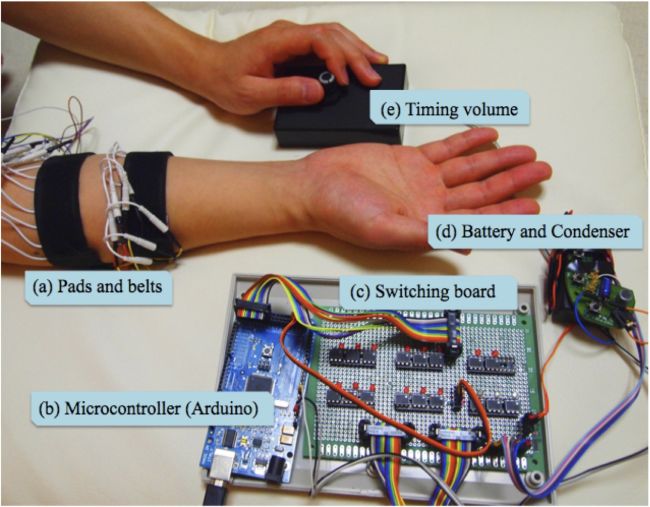 What the PossessedHand does is act as a remote control for, well, your hand. Attached below the elbow and secured by a mess of wires, the PossessedHand isn’t a cyborg prostheses yet, but who knows what the future holds?

The PossessedHand was originally tested on stringed musical instrument to see if the programming worked. It did, to a certain extent. Next up was basic commands to the fingers, which complied accordingly with simple fidgets and gestures.

Of course, the PossessedHand in its current form won’t be doing a lot of good. It’s too raw, untested, the machinery imperfect. The ultimate goal of the PossessedHand program is to allow wearers to communicate and work with the controlled hand without having to think about. A little creepy. Ever seen that Michael Caine flick The Hand from the 70s? Frightening stuff—a severed limb goes amok and kills people.

So in the sci fi horror flick involving some dude’s ‘possessedhand’ will the scariest part be when he strangles himself?