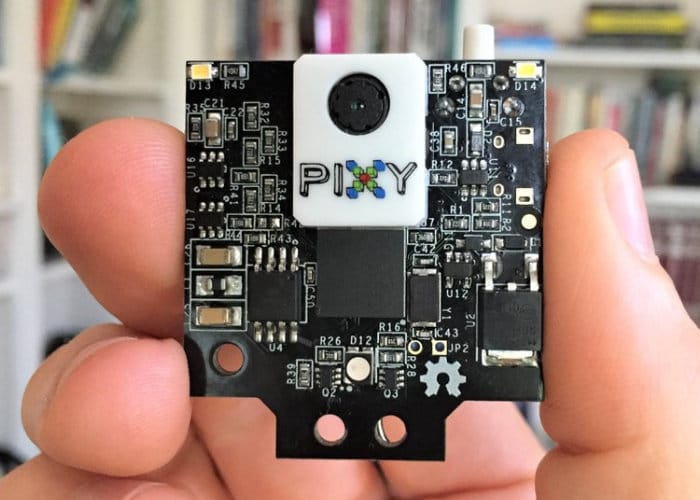 Raspberry Pi and Arduino enthusiasts, makers and developers may be interested in a new smart sight sensor created by development company Charmed Labs. The Pixy2 smart sensor builds on the company’s previous camera and is now smaller, faster and capable, enabling users to enable projects to detect objects quickly. The latest Pixy2 has new algorithms that identify and track lines for use with line-following robots as well as the ability to read road signs and detect intersections when required. “The road signs can tell your robot what to do, such as turn left, turn right, slow down, etc.  And Pixy2 does all of this at 60 frames-per-second, so your robot can be fast, too.”

Pixy2 has been created to support a wide variety of microcontrollers including Arduino, Raspberry Pi and BeagleBone Black and is capable of processing images at 60 frames per second. With all processing handled on board freeing up the mini PC or microcontroller to complete other important tasks. The Pixy2 is also equipped with an integrated light source that it can turn on for when the lighting needs a boost. As well as a redesigned pan-tilt mechanism that gives Pixy2 the ability to look around and track the objects that it detects.

“No need to futz around with tiny wires — Pixy2 comes with a special cable to plug directly into an Arduino and a USB cable to plug into a Raspberry Pi, so you can get started quickly.  No Arduino or Raspberry Pi?  No problem!  Pixy2 has several interfaces (SPI, I2C, UART, and USB) and simple communications, so you get your chosen controller talking to Pixy2 in short order.” For more information and full specifications on the Pixy2 smart sensor jump over to the official Pixycam website by following the link below.