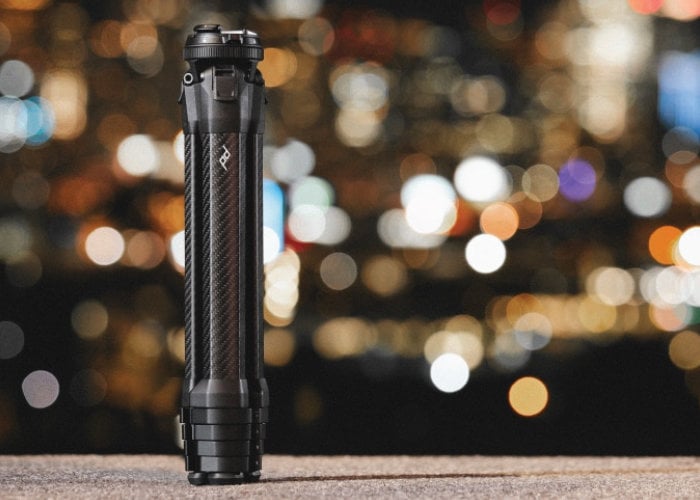 Peak Design has taken to Kickstarter for a ninth time to launch its new Travel Tripod which is available in either aluminium or carbon, and both are now available at discounted Kickstarter prices. The Peak Design carbon travel camera tripod is now available to back with pledges from $479 offering a $121 saving off the recommended retail price of $600 which will take effect once the Kickstarter campaign comes to an end.

If your budget won’t quite stretch to carbon fibre the aluminium camera tripod is available priced at $289 offering a $61 saving off the recommended retail price of $350. Worldwide shipping for both is expected to take place during December 2019. With still 57 days remaining on the campaign Peak Design has already raised over $2.7 million thanks to over 6,000 backers for their fully featured tripod.

“We spent 4 years redesigning the tripod from the ground up to eliminate dead space and minimise packed-down size. We made a tool that deploys and packs down rapidly—nearly twice as fast as a traditional tripod. We made it intuitive and delightful to use. We engineered professional-quality stability and performance. And we added thoughtful features to help you get the shot— with any gear, in any environment, from any point of view. We built the Travel Tripod around the photographer’s workflow. How? We are photographers.”

“With traditional travel tripods, slow setup may mean a missed shot. Not with the Peak Design Travel Tripod. We designed strong, easy-to-use leg cam levers that can be operated together (no tedious twist locks!). With our architecture there’s no need for the legs to flip up/down when packing and unpacking. And, we topped it off with lightning-fast camera quick-attachment/release.”

To make a pledge jump over to the official Kickstarter crowdfunding campaign page by following the link below.