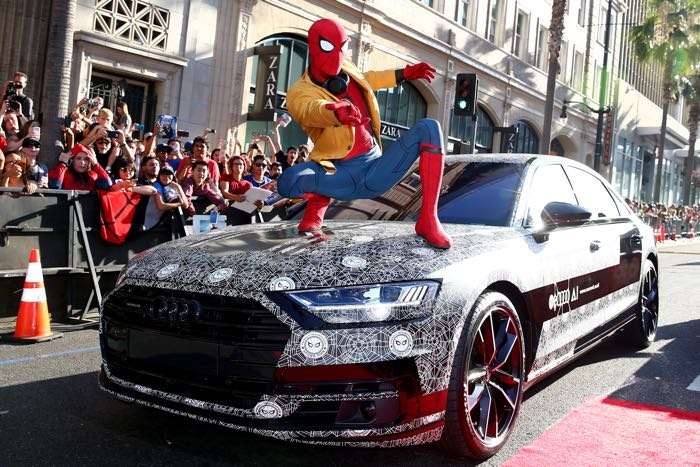 Audi has shown off a camouflaged version of their new Audi A8 at the premiere of the new Spider Man Homecoming movie in the US.

The new Audi A8 can also be seen in the video below and we get a sneak peak at some of its features ahead of its official unveiling at the Audi Summit in Barcelona on 11 July 2017.

Normally, Audi’s Technical Development team conceals their secret prototypes with a special adhesive foil with a camouflaged pattern of black and white swirls. However, this time Audi Design developed a new camouflage foil with a Spider-Man design specifically for the appearance on the red carpet at the world premiere of ‘Spider-Man: Homecoming’. The traditional swirl design has been modified to incorporate spider webs on the vehicle doors and within the signature rings.

Even before its official world premiere, the first glimpses of the Audi A8’s can be seen on the big screen in ‘Spider-Man: Homecoming’ – viewers can see parts of the front and side designs in the film. In addition, moviegoers also get to see Audi AI Traffic Jam Pilot in action when Happy Hogan drives Peter Parker and momentarily removing his hands from the wheel. Thanks to the activated Audi AI Traffic Jam Pilot, the Audi A8 can take over the task of driving and continues to move autonomously.