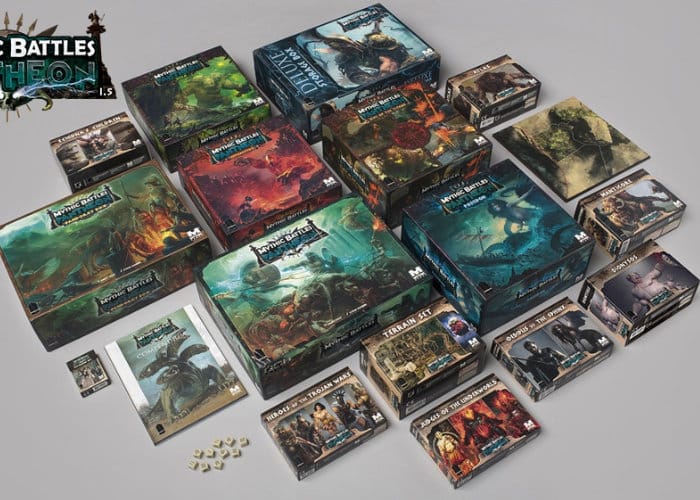 Monolith Board Games has raised over $660,000 from backers to make sure that their board game Mythic Battles Pantheon 1.5 makes the jump into production. Watch the promotional video below to learn more about what you can expect from this new version of Mythic Battles: Pantheon.

For those of you not familiar with the board game “Mythic Battles is a fictional universe and a range of games that’s constantly evolving. Knowing this, we have been listening closely to our gaming community for player feedback, whether it comes from groups of friends or tournament players. When we combined our observations with yours we have come to realise that some units, game modes, and confusing rules need to be addressed and/or revised. And so for this reprint, we felt our best course of action was to implement some of these changes into MB 1.5.”

The latest Kickstarter offers a wealth of miniature’s together with the Core Box and the chance to receive all the unlocked stretch goals from the first Kickstarter campaign as well as seven expansions. For more details and full specifications jump over to the official Kickstarter crowdfunding campaign page by following the link below. All pledge levels will be available in both English and French. You won’t have to choose your language as the products include both languages.

“The core game box gives you a complete game with dozens of stretch goal extras. You don’t actually need any more to have months or even years of replay value. However, you can never have too much of a good thing, and the mythology we’ve based Mythic Battles: Pantheon on is vast, so there was a lot we couldn’t fit into the core box.
If you’re interested in purchasing any of these optional buys, please just click the “Manage Your Pledge” button on the Mythic Battles: Pantheon Kickstarter page, and add the amount of the items that you’d like to get in the pledge manager.”