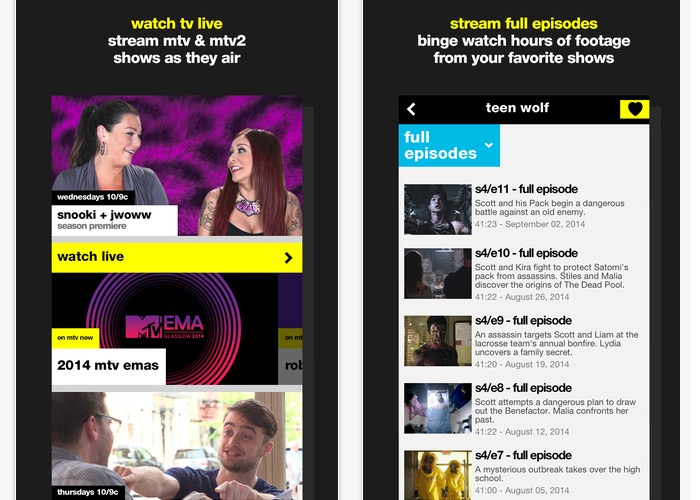 Users of the MTV Android and iOS applications will be pleased to know that the new update has been rolled out this week which brings with it the ability to view MTV live feed footage directly on your iOS or Android smartphone and tablet devices.

Previously the MTV app only allowed users to view the catch up service on mobile devices but from this week MTV viewers can now watch their favourite episodes live.

The latest MTV Live Feed update has added the ability to watch MTV and MTV2 live right from your smartphone and tablet devices allowing users to enjoy TV directly from their mobile devices. The latest update MTV 2.6 released yesterday also brings with it a number of performance tweaks, but fixes and enhancements and is 22.5mb in size. MTV explains :

“Watch MTV shows anytime, anywhere from your favorite Apple or Android device. Just sign in with your TV provider to watch recent episodes from current MTV series including Teen Wolf, Finding Carter, Teen Mom 2, Awkward and more! Access is included with your TV subscription to participating providers. If your provider isn’t listed, don’t panic! We are working hard to get all TV providers to participate.”

For more information on the new MTV Live Feed update jump over to either the Apple iTunes App Store or the Google Play Store website for ability to download and update the free application on your mobile devices.