Motorola is rumored to be working on a number of devices, including a budget Moto E, as well as the successor of the Moto X. There’s no word about any of those, but it seems the company might be getting ready to launch a new handset.

Recently, the company sent out invites for a press event in London May 13th. There’s no word from Motorola, but the invite do suggests we’re going to see an affordable handset at the event.

Here’s what the invite had to say:

“Connect more people to the world’s information and each other, and they can do great things. Introducing the next smartphone from Motorola to make these connections happen. Made to last. Priced for all.”

Based on rumors, we might see the affordable Moto E see the daylight at the event in London. The handset is rumored to come with a 4.3-inch display sporting a resolution of 1280 x 720 pixels, as well as a dual-core processor clocked at 1.2GHz with 1GB of RAM and 4GB of internal storage. We’re hoping it will feature a microSD card slot for expandable storage, but there’s no confirmation. 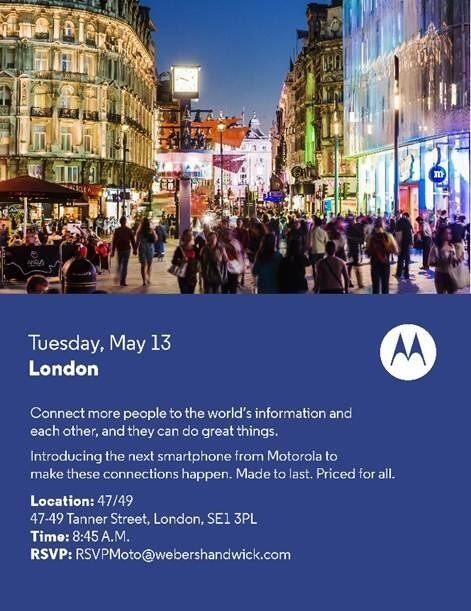 Mark your calendars for May 13th as we might see another decent yet affordable handset from Motorola, a company which will soon be a part of Lenovo.