Looks like MediaTek has some more announcements to make. A few hours back, we reported that the company is working on a Triple-SIM technology that will allow users to use three SIM cards in one handset. Today, the company announced the world’s first true octa-core processor. When we hear about “Octa-core” the first thing that comes to mind is Samsung’s Exynos 5 Octa, but in that chip, only four cores are active at a time. The same is the case with other manufacturers who claims that the chipset is “octa-core”. However, this is not the case with MediaTek’s true octa-core. The company says that all the eight cores work simultaneously with maximum performance and efficiency.

Unlike existing octa-core solutions in the market, which can only activate half of their CPU cores at once, MediaTek True Octa-Core allows for all eight of its cores to run simultaneously, offering the ultimate combination of performance and power-efficiency. 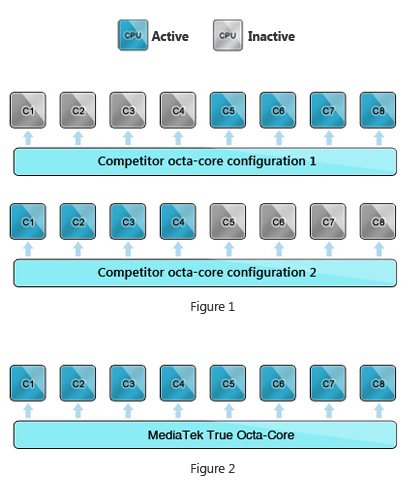 Many of you know that many global smartphone vendors have not used MediaTek’s chipsets in their flagship handsets and other high-end devices. MediaTek is more popular in supplying processors to the low-end Android smartphone manufacturers.

So, it is very important the company get in talks with other manufacturers to use this true-octa core chips in their high-end devices before other companies such as Samsung or Qualcomm launches a similar product. Samsung already announced the latest Exynos 5 Octa few days back which they claim is faster, better than its previous version and can use all the eight cores. It is the game changing position for MediaTek, if they can get in talks with a big vendor, they will definitely improve their reputation in the market.