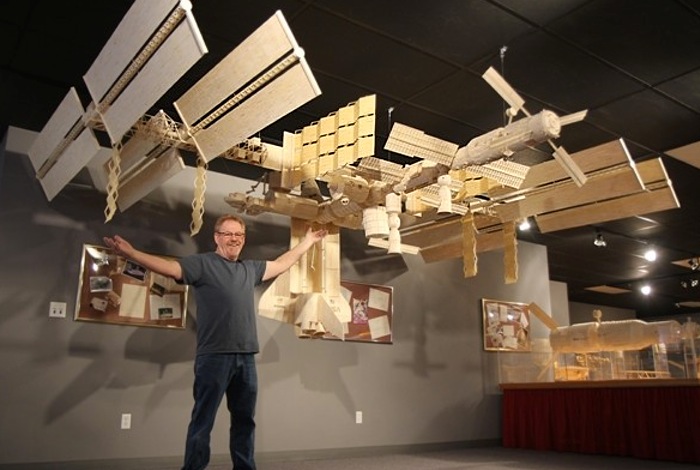 Pat Acton of Iowa has this month unveiled his 1/26 scale model of the International Space Station (ISS) which he has built using matchsticks, 282,000 of them to be precise.

Building the ISS took roughly 1950 hours to complete as well as 8 gallons or 30 litres of glue creating a finished model that measures 4.1 m x 2.8 m wide.

As well as building the awesome International Space Station, Acton has also built scale models of the Hogwarts Castle from the Harry Potter series of books, the Notre Dame Cathedral, the One World Trade Center and the city of Minas Tirith from the Lord of the Rings books. Gizmag explains that :

“Acton, who now sources his flameless matchsticks from the Ohio Blue Tip Company, learned that he could not only bend the sticks using needle nose pliers, but that it was possible to build sheets of the singular wooden pieces using a Plexiglas sheet and glue. Once the glue has dried, Acton peels the matchstick sheet from the Plexiglas and shapes it for larger surfaces or forms it into structural pieces.”

If you are in Iowa Acton’s ISS matchstick creation can be seen at the Matchstick Marvel Museum in Gladbrook, Iowa.