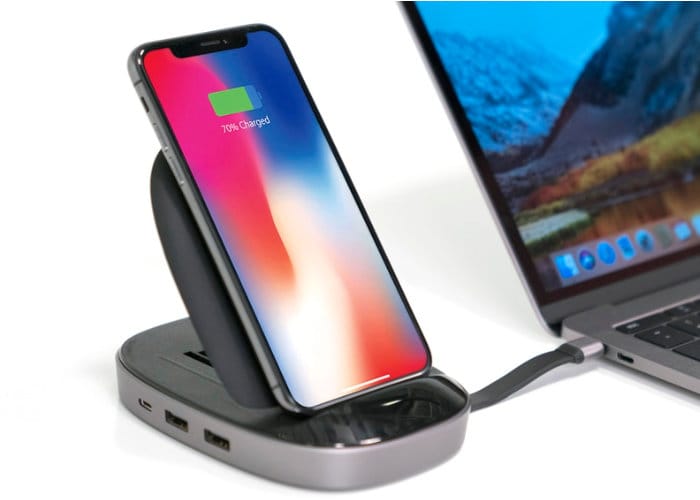 Last month Sanho based in San Francisco, California launch a new Kickstarter campaign to raise the hundred thousand dollars the company required to take their new HyperDrive USB-C Hub and wireless iPhone charging stand into production. With still 13 days remaining on the campaign the iPhone wireless charger has now raised over $549,000 thanks to nearly 4,200 backers. To learn more about the HyperDrive USB-C Hub and iPhone wireless charging stand watch the demonstration video below.

The HyperDrive USB-C Hub offers users a 7.5w wireless charger for the new iPhone smartphone’s as well as supporting Qi wireless charging technology on other devices providing 5,10,15W high-speed Android wireless charging. The HyperDrive is now available to back with pledges now available from $109 or roughly £78 still offering a considerable $50 saving off the recommended retail price that will kick in after the Kickstarter campaign of $159. With delivery expected to take place during May 2018 if all goes well with the manufacturing process.

The HyperDrive USB-C Hub is equipped with an integrated retractable cable and transforms a single USB-C port into eight ports offering 4K HDMI, Gigabit Ethernet, microSD, SD, 3 x USB 3.1 and USB-C Power Delivery. For more information, a list of all available pledges and full specifications jump over to the Kickstarter crowdfunding campaign page by following the link below.