Not too long ago, Google Nexus 4 released Android 4.4 Factory Images for a bunch of devices including the Google Nexus 4. At that moment, many of us predicted that it wouldn’t be too long before we can see the notification on our handsets. Well, the moment is finally here; Google is rolling out the over-the-air Android 4.4 KitKat update for Google Nexus 4 with build number KRT16S.

Several Nexus 4 owners are reporting that they’ve received the latest Android 4.4 KitKat update, but there’s no official announcement from the search engine giant about the rollout of the update. 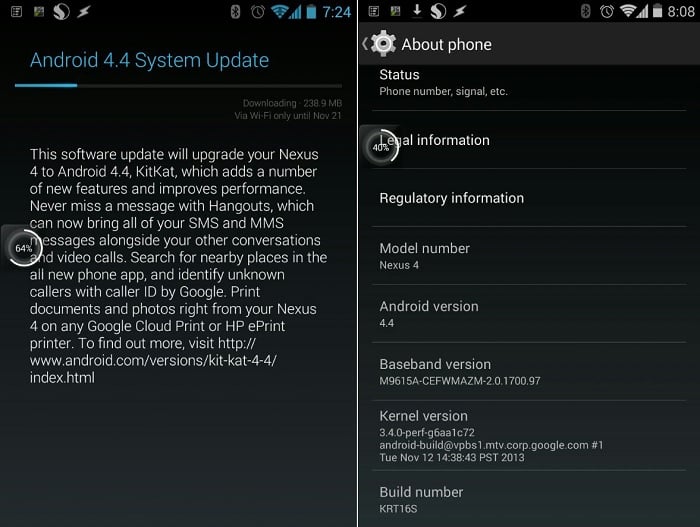 Sized at almost 240MB, the latest Android 4.4 update brings several new features and enhancements to Google Nexus 4, including a new Hangouts application with SMS and MMS integration inside the application, Google Cloud Print, many under the hood changes to improve device performance with low-end devices and much more.

Don’t fret if you can see the update right now, you should know that the update is rolled out in phases and would definitely reach your Nexus 4 in the coming few days. Just keep an eye on your notification bar or you can manually check for the update. We’ll update you if there’s any official word from Google about the rollout.